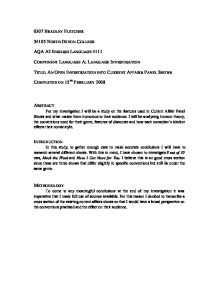 0307 BRADLEY FLETCHER 54105 NORTH DEVON COLLEGE AQA A2 ENGLISH LANGUAGE 4111 COMPONENT LANGUAGE A: LANGUAGE INVESTIGATION TITLE: AN OPEN INVESTIGATION INTO CURRENT AFFAIRS PANEL SHOWS COMPLETED ON 15TH FEBRUARY 2008 ABSTRACT For my investigation I will be a study on the features used in Current Affair Panel Shows and what makes them humorous to their audience. I will be analysing humour theory, the conventions used for their genre, features of discourse and how each comedian's idiolect effects their comic style. INTRODUCTION In this study, to gather enough data to make accurate conclusions I will have to research several different shows. With this in mind, I have chosen to investigate 8 out of 10 cats, Mock the Week and Have I Got News for You. I believe this is an good cross section since these are three shows that differ slightly in specific conventions but still lie under the same genre. METHODOLOGY To come to any meaningful conclusions at the end of my investigation it was imperative that I made full use of sources available. For this reason I decided to transcribe a cross section of the existing current affairs shows so that I would have a broad perspective on the conventions practised and the effect on their audience. ANALYSIS GENRE A current affair is a term used to describe the broadcasted discussion of events with political or social interest and importance. ...read more.

The theory suggests that being humorous relies on us seeming superior to others, and in the case of Have I Got News For You to suggest the inefficiency of the government. So by default, this means that the comedians themselves, by making the audience laugh are trying to establish positions of superiority. For a point of view to be taken in by the audience, even in a humorous form, is noticeably reliant on this theory. An important perception about the humour used in these contexts is that it is usually more intellectual than slapstick. Current events and assumed understanding from the audience provides its basis and the comedian's wit is usually pivotal to its effect. In Transcript A Sean Lock says that when he was at the supermarket he noticed that a Valentine's Day card was eight pence. The relevance is not supposed to be that important but the interpretation by the audience is. By suggesting that this is a cheap gift for your partner he assumes the audience will think the same. This view is then voiced by a guest on the show, but to deviate from the purpose he continues by saying that if you waited until closing time you could get it for six pence. Now although this could be perceived as a device to undermine the other guest it is also an example of the comedian's shared wittiness with the audience, another effective humour strategy. ...read more.

This genre does not use a formulaic language; use of a common lexis and varying register makes this fairly evident. The content is controlled by what is funny often rather than what is relevant; however for the shows purpose this is totally acceptable. Also, although attention is played to structure there is not a high degree of fluency present in the dialogue. By taking detailed transcripts of each example I have been able to examine features of discourse portrayed in the genre. However since the visual elements of the medium cannot be accurately recreated through a transcription it is also appropriate to point out that some of the comic content is outside the scope of this investigation. The use of body language is an integral part of each comedian's comic style. However, the most significant finding from this investigation from my point of view was that the genre is the way in which the principles of conversational spontaneity are modified to suit the purpose of the show. The structured approach to the spontaneous participation of each comedian is a foundation on which the comedians build from, yet it does not restrict their creative input in ways that may be seen on for example, comedy sketch shows. These are always thoroughly scripted and therefore replace the role of comedians as actors. Word Count: 2, 348 words (Counted by Word Processing Software, excludes title page and transcripts) ...read more.