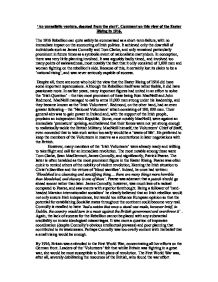 'An unrealistic venture, doomed from the start'. Comment on this view of the Easter Rising in 1916.

'An unrealistic venture, doomed from the start'. Comment on this view of the Easter Rising in 1916. The 1916 Rebellion can quite safely be summarised as a short-term failure, with no immediate impact on the succouring of Irish politics. It achieved only the downfall of individuals such as James Connelly and Tom Clarke, and only remained particularly prominent in future times as a symbolic event of nationalistic martyrdom. In conception, there was very little planning involved. It was arguably badly timed, and involved too many points of awkwardness, most notably the fact that it only consisted of 1,600 men and woman fighting on the rebellion's side. Because of this, it certainly lost its claim to be a 'national rising', and was never seriously capable of success. Despite all, there are some who hold the view that the Easter Rising of 1916 did have some important repercussions. Although the Rebellion itself was rather feeble, it did have passionate roots. In earlier years, many important figures had united in an effort to solve the 'Irish Question' - the two most prominent of these being Eoin MacNeill and John Redmond. ...read more.

Connolly is recalled to have 'had a notion that once a stand was made, however brief, in Dublin, the country would turn in a mass against the British government and overthrow it'. Again, the lack of success for the Rebellion cannot be placed with any substantial credibility on innate ideological miscarriages. It was more a question of imprecise coordination (despite Connolly's obvious intellectual prowess) and poor planning that contributed to its weaknesses. Perhaps Connolly was too overly content with his belief that a small rising would be enough. By 1916, Britain was embroiled in the First World War, concentrating all her efforts on the German front. Leaders of the 'Volunteers' felt that whilst Britain was fighting in a great war, she would be most susceptible to Irish plans of revolution. The First World War was, after all, severely debilitating the resources of the British, who found the war effort extremely mentally and economically draining. It also left Anglo relations at an all time low. The Volunteers thought, prematurely, that this was the right time to take action. ...read more.

The Rising saw soldiers ransack and obliterate households, assassinate their occupants, and then progressed even further towards the murdering of innocents. It is estimated that four hundred and fifty rebels and civilians were killed or murdered, and about two thousand wounded during the weeks' siege. It was all over by Saturday 29 April. The Easter Rising of 1916 certainly was an 'unrealistic venture, doomed from the start'. The event itself did not boast as much power as it did character. It was virtually impossible that any victory for a 'minority of a minority' (R.F Foster) could be achieved, and there was little substantial weight or support behind its efforts. However, with the resultant executions of public figures involved in the rebellion, it soon gained an important reputation within general Irish Nationalism. It certainly had major repercussions for the future of Irish politics, and a general pattern of Nationalism soon began to appear once again in Ireland, and this time arguably more passionately. In this sense, it definitely did not fail, nor was it wholly 'unrealistic'. It sowed the seeds for future political feuds between the British and Irish. ...read more.