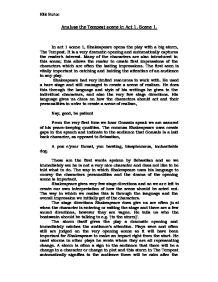 Analyse act 1 scene 1 of the tempest

Analyse the Tempest scene in Act 1, Scene 1. In act 1 scene 1, Shakespeare opens the play with a big storm, The Tempest. It is a very dramatic opening and automatically captures the reader's interest. Many of the characters are also introduced in this scene; this allows the reader to create first impressions of the characters which are often the lasting impressions. The first seen is vitally important in catching and holding the attention of an audience in any play. Shakespeare had very limited resources to work with. He used a bare stage and still managed to create a scene of realism. He does this through the language and style of his writings he gives to the individual characters, and also the very few stage directions. His language gives us clues on how the characters should act and their personalities in order to create a scene of realism, Nay, good, be patient From the very first time we hear Gonzalo speak we are assured of his peace-keeping qualities. The commas Shakespeare uses create gaps in the speech and indicate to the audience that Gonzalo is a laid back character, as opposed to Sebastian, A pox o'your throat, you bawling, blasphemous, incharitable dog. ...read more.

However, it is used particularly similarly in Twelfth Night. There is a group of shipwrecked passengers centred around Viola and Sebastian, the twins, and their friends, Viola's sea captain who fades from the action, and, more important, Antonio, who plays a significant role later in the comedy. This is very similar to The Tempest as there is a group of ship wrecked passengers which mainly centres on Gonzalo and Antonio although there are smaller speeches from Alonso and Sebastian. The boatswain fades from the action after the opening scene. There are even two of the characters who share the same names, Sebastian and Antonio. Alonso, the King, does not feature much in the opening scene and is only given one line, Good boatswain, have care. Where's the master? / Play the men! I believe Shakespeare did this in order to show that Alonso is quite a weak character, therefore, building up to when he could have easily been killed by Antonio and Sebastian later on in the play. He also does not seem to be as powerful or overruling of the other characters as the audience would expect, 'Good boatswain, have care.' He speaks to the boatswain as though they are friends despite their separate positions in society. ...read more.

I think he is left talking to himself at the end to show the audience that this is often the case and that people do not take him seriously as is shown in the mockery of Gonzalo by Antonio and Sebastian. In the first scene, elisions are used is in the Master's speech, 'Speak to th' mariners. Fall to't yarely', Sebastian's speech, 'A pox o'your thoat' and Antonio's speech, 'Let's all sink wi'th' King.' I believe Shakespeare used elisions of language for Antonio and Sebastian in order to compare them with the class and bad manners they share with the Master. As opposed to the speech of Alonso and Gonzalo who both speak with no elisions in this scene. This shows them to be upper class and well educated, as a King should be and to show Gonzalo, although just an honest councillor is in fact more intelligent than both Antonio and Sebastian. This scene is echoed in later parts of the play as it divides the characters into groups which are reiterated throughout the play, e.g. Antonio and Sebastian share the same type of language as do Gonzalo and Alonso. Both these pairs are seen as together during the play e.g. when Gonzalo and Alonso are both put to sleep and Antonio and Sebastian are left to scheme together. Ellie Burton ...read more.