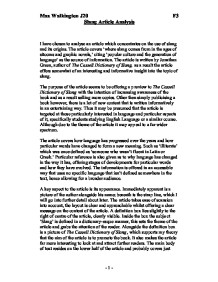 I have chosen to analyse an article which concentrates on the use of slang and its origins. The article covers 'where slang comes from in the ages of sitcoms and graphic novels,' citing 'popular culture and the generation of language' as the source of information. The article is written by Jonathan Green, author of The Cassell Dictionary of Slang, as a result the article offers somewhat of an interesting and informative insight into the topic of slang. The purpose of the article seems to be offering a preview to The Cassell Dictionary of Slang with the intention of increasing awareness of the book and as a result selling more copies. Other then simply publicising a book however, there is a lot of new content that is written informatively in an entertaining way. Thus it may be presumed that the article is targeted at those particularly interested in language and particular aspects of it, specifically students studying English Language or a similar course. Although due to the theme of the article it may appeal to a far wider spectrum. The article covers how language has progressed over the years and how particular words have changed to form a new meaning. ...read more.

The paragraph heavily criticises the book and mocks it in a light-hearted way, "The stuff was there of course, but he missed it all" is how the novel is summed up. Examples of the failings from the Dictionary of Slang are then given, with particular notice given to the complete lack of any sort of inclusion from modern popular culture such as music and television. Jazz specifically holds many cases that were left from the book, amusing examples are given such as 'sweet potato pies' and 'jellyrolls'. Further humour is injected into the article with the inclusion of slang references for the male and female genitalia. 'Pudendum' or literally 'That of which one is to be ashamed' and 'Membrum Virile' or literally 'the virile member' is taken from the Dictionary of Slang. Although the humour could be considered slightly vulgar and unnecessary it certainly livens up the article and adds a certain element of risk to it, whilst retaining the interest of the reader. Jonathan Green then almost counters what he has written in the first paragraph when stating, "I'm the last to pretend I...Can hope to cover it fully" in reference to covering every aspect of slang. ...read more.

This point is well realised and conveyed by Jonathon Green and instigates a previously unnoticed thought by the reader. Further representations are given, music and the work of the 'Wu-Tang Clan' show how slang has made its way from 'the cutting edge of US ghetto life' into common slang around the world. A final point is then made in the article, with a cross-reference to the aforementioned 'counter-language' and how it can be decided whether a word is or is not slang or an accepted form of English. "It's not so much dumbing down, but broadening out" is how Jonathon Green expresses his views on the spread of slang into common phrase. It is then claimed that through the diversity of slang and due to the nature of it's ever-expanding potential, slang offers "An unparalleled richness and multiplicity of modern language." It is on this point the article ends, its final ideology conveyed. By offering an article that was immediately accessible, informative and humorous the ideas that the article wished to put across were successfully done so. As a result the article is memorable and may instigate a fair bit of thought onto the readers. Words: 1,513 ?? ?? ?? ?? Max Walkington J20 F3 Slang Article Analysis - 2 - ...read more.