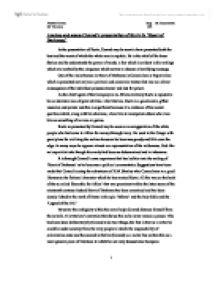 Analyse and access Conrad's presentation of Kurtz in Hearts of Darkness

Analyse and assess Conrad's presentation of Kurtz in 'Heart of Darkness.' In the presentation of Kurtz, Conrad may be seen to have presented both the best and the worst of which the white man is capable. He is the chief of the Inner Station and he understands the power of words, a fact which is evident in his writings which are marked by the eloquence which serves to obscure a horrifying message. One of the main themes in Heart of Darkness is Colonialism or Imperialism which is presented not only as a political and economic venture but also as a direct consequence of the individual possessiveness' and l**t for power. As the chief agent of the Company in its African territory Kurtz is reputed to be an idealistic man of great abilities. Like Marlow, Kurtz is a good orator, gifted musician and painter and this is significant because it is evidence of his mental qualities which, along with his charisma, allow him to manipulate others who view him as something of an icon or genius. ...read more.

It is Marlow's narration that shows this as he never names a person. This has been done deliberately by Conrad to do two things; the first is that as a writer he could be under scrutiny from the very people to which the responsibility of colonization rests and the second is that he (Conrad) as a writer has written this as a more general piece of literature to which he not only denunciates European Imperialism in Africa but all other countries to which Imperialism is seen as the 'enlightening' other countries. Kurtz himself is seen as an enlightener but from the beginning of the novella we have an atmosphere of 'brooding gloom' to which he likens to the Romans whom came across to enlighten the barbaric British and through Marlow states that 'They were men enough to face the darkness.' Indeed it the very theme of darkness is always present within the book and from the story of Marlow we get to the station of 'The Company' at which Marlow has been sent for a medical and to be assigned a steam ship. ...read more.

is making the journey to Kurtz is all to do with the influence of Marlow's aunt as to Marlow being perceived as another man with potential enough as to be just like Kurtz thus a factor of fear of Kurtz must be taken into account making our interpretation of Kurtz even more difficult when looking at the reliability. We may see the accountant as having a favourable first impression however we have this as a backdrop to the hypocrisy of imperialism to which Marlow has already witnessed namely the pointlessness of the French firing cannonballs into the wilderness. Thus we get the message that of Kurtz who may be described as an 'emissary of light' with all the European ideals to be tainted. It is on this journey to Kurtz that can be said to be a metaphor for the journey into the soul. The title itself may be part of the presentation of the Kurtz as it is this journey towards Kurtz or towards the Heart of Darkness. ?? ?? ?? ?? Alastair Cowan English Coursework Mr Thomson U61 1 ...read more.