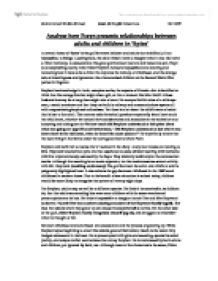 Analyse how Frayn presents relationships between adults and children in Spies

Analyse how Frayn presents relationships between adults and children in 'Spies' A central theme of 'Spies' is the gulf between children and adults that is difficult, if not impossible, to bridge. Looking back, the adult finds it hard to imagine what it was like to be a child. Ironically, to demonstrate this great gulf between mature and immature self, Frayn is accomplishing exactly what Older Stephen claims is impossible-he is recalling and recreating how it feels to be a child. He captures the naivety of childhood, and the strange mix of knowingness and ignorance that characterised children of the Second World War period in England. Stephen has knowledge in Latin, complex maths, the exports of Canada -but is horrified to think that his teenage brother might kiss a girl, or that a woman like Mrs. Berrill whose husband is away for a long time might take a lover. He accepts Keith's tales of a wild-ape man, a serial murderer and that they can build a railway and communications system all with unquestioning boyhood enthusiasm. Yet there is a lot about the child's state of mind that is lost to the adult. The narrator asks rhetorical questions repeatedly about how much the child knew, whether he noticed the inconsistencies and anomalies in the stories he was accepting and taking part in-'So how much did Stephen understand at this point about what was going on' (pg 137) ...read more.

I'm on the verge of understanding mysteries that have been closed to me (p166-167). Stephen here considers himself on the brink of growing up, leaving behind the fantasy games he has played with Keith and embarking on new, more adult mysteries. The softness of Barbara's body lying across him, and memories of his altercation with Mrs. Hayward's 'soft bosom' in the tunnel, commence the first stirrings of sexual interest in Stephen. It is Barbara who acts as the intermediary between the world of Stephen and the world of adults. Being a girl, she would regularly be exposed to gossip and hearsay and so would be able to relay this information to Stephen who shockingly hears stories about Auntie Dee having a boyfriend and the situation of the Haywards. Barbara notices that Mrs. Hayward doesn't do her regular visits to Auntie Dee anymore, but sees Keith doing her job. Stephen is not interested in what she says but clearly feels jealous of her superior knowledge about his closest ally-'...still sourer tide of jealousy sweeps through my vein' (pg 154-155).The hideout which encompasses many important events in the novel has a special significance to it. Frayn portrays the hideout as a separate world with its own rules. ...read more.

As readers, we can see the absurdity of a statement such as 'Green's the right colour for a bicycle, just as it's wrong one for a belt or a bus' (pg.17).Clearly, what makes something right or wrong here is simply whether Keith or Stephen do it. We recognise and empathise with the childhood insecurity in Stephen that enables Keith to impose his own 'Rightness'. Paradoxically, he is reluctant to do what Mrs. Hayward and Uncle Peter ask of him. This again expressively highlights the subservience of Stephen and indicates he only follows those who dominate him physically and intellectually (Keith).No adult will dominate a young innocent boy like Stephen. Furthermore, we can see the gradual metamorphosis of Stephen to an adult at the ending of the novel when Stephen decides to take rations to the man (Uncle Peter) living in the barns under the corrugated iron. His behaviour contrasts with the banging on the iron with sticks which we see earlier in the book. Stephen shows his ever-growing manhood as even though the man is sick and hidden and could not compel Stephen physically, Stephen is incapable of ignoring his innate authority as an adult. It also emphasises the fact that 'Spies' is a 'bildungsroman' as it shows the development in maturity of the protagonist - Stephen. ?? ?? ?? ?? Muhammad Shakir Ahmed AQA AS English Literature 10/12/09 ...read more.