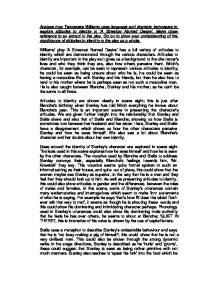 He defends this to Blanche and Stella and seems to have a good idea about his own identity, even though others may think differently of him. Stanley speaks using a lot of colloquial language such as 'gonna be' and 'H'lo. Aw, yeh', this could show attitudes towards his identity, reflecting perhaps where he is from, his origins and his identity is different to the others, he seems to speak differently to Blanche and Stella as they don't really use a lot of colloquial language. In contrast to this, the use of interrogatives in Blanche's utterances could show her nervousness for example; she asks Stella 'What happened while I was bathing? What did he tell you Stella?', the way that this phrase seems to be spoken seems quite urgent, the way she asks the questions one after the other shows her unstable character and personal identity the way that she wants to know everything. It also seems like she doesn't really trust anyone as she is asking so many questions. This shows that Blanche sees her identity as different to the others there and feels quite superior to them as she feels she should know everything, like she needs to be the centre of attention perhaps. ...read more.

This shows that she obeys Stanley, or she doesn't want Blanche to interfere with their relationship. Stella is perhaps torn between the two; her husband and her sister as both are quite different and she is the one in the middle. Stella might feel that although Stanley and Blanche are both a part of her family, she cannot fully have both and so has chosen Stanley, he is her future. In the play as a whole, attitudes to identity are quite important as they show us a lot about the characters and who they are; attitudes to identity also show us how the characters are likely to behave later on the in play. With Stella we come to see how she is caught in the middle off maybe her two identities; her past which included her sister Blanche and her new life with her husband Stanley. At the end of the play though we come to see how her relationship with her husband is perhaps a little stronger than the one she shares with Blanche as she obeys Stanley and sends Blanche away. Identity is quite important as it shapes how the other characters treat one another, for example with Blanche, discovering the true identity of Allen ultimately lead to his death and perhaps the beginning of Blanche's troubles. , ...read more.