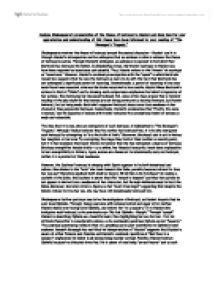 Analyse Shakespeares presentation of the theme of betrayal in Hamlet and show how far your appreciation and understanding of this theme have been informed by your reading of The Revengers Tragedy.

Analyse Shakespeare's presentation of the theme of betrayal in Hamlet and show how far your appreciation and understanding of this theme have been informed by your reading of "The Revenger's Tragedy." Shakespeare revolves the theme of betrayal around the central character - Hamlet- and it is through Hamlet's introspection and his soliloquies that an audience is able to witness the theme of betrayal in action. Through Hamlet's soliloquies, an audience is exposed to his belief that Gertrude has betrayed his father. In Elizabethan times, Gertrude's marriage to Hamlet may have been regarded as incestuous and unlawful. Thus, Hamlet refers to the "sheets" of marriage as "incestuous." However, Hamlet's continual preoccupation with the "speed" in which Gertrude remarried, suggests that he sees the betrayal as more to do with the fact that Gertrude has not undergone a significant period of mourning. Conventionally, a period of mourning of one year would have been expected, whereas Gertrude remarried in two months. Hamlet likens Gertrude's actions to that of "Niobe" and by drawing such comparisons emphasises his belief in hypocrisy of her actions, thus betraying her deceased husband. ...read more.

Shakespeare further portrays men to be the instigators of betrayal, as Hamlet forgets that he ever loved Ophelia. Through, being overcome with intense hatred and anger at his mother, Hamlet denies ever having loved Ophelia, and orders her "to a nunnery." It is Hamlet who instigates such betrayal, as he previously says "My fair Ophelia - Nymph." Through "nymph" Hamlet is describing Ophelia as a beautiful maid, thus highlighting his love for her. Yet, his attitude thereafter is considerably callous, as he continually questions Ophelia on her "honesty." The continual questioning reflects that of a gruelling and in part contributes to Ophelia's later madness. Kenneth Brannagh has said that his interpretation of "Hamlet" suggests that Hamlet is aware of either Polonius and Claudius and Hamlet's continual repetition of "Get thee to a nunnery" emphasises his belief in all women being morally corrupt. Possibly, Hamlet betrays Ophelia because he ultimately loves her. He is aware of men being "arrant knaves" and as such may be protecting Ophelia. Nevertheless, his continual rejection of Ophelia and his violent sentiments highlight the concept that men were often instigators of betrayal at the expense of women. ...read more.

Hamlet's continual dwelling on the issues of the afterlife and the suggestion of the terrors of the Purgatory numbs him into inaction. Hamlet himself says "conscience make cowards of us all" emphasising his inability to kill Claudius swiftly is due to his continuous pondering over the potential consequences, since he is aware of the repercussions of revenge. Thus, at the end of the play just as Claudius is punished for his sins of betrayal, Hamlet must face his own punishment for avenging such betrayal. Shakespeare portrays betrayal as an inevitable consequence of the desire of characters to seek for power and greed. It is usually the male characters that attempt to gain from such positions, thus an audience are aware that men usually are perpetrators of betrayal. This is evident in "The Revenger's Tragedy" where Ambitioso and Supervacuo's desire to become Duke, which leads them to betray Lussurioso. Hamlet believes that his mother has betrayed his father and Ophelia is susceptible to carrying out such betrayal too, but it is more "female frailty" rather than betrayal that steers Gertrude's actions. Gratiana exemplifies such "frailty" through betraying her own children and succumbing to what was perceived as women's "natural sin." ...read more.