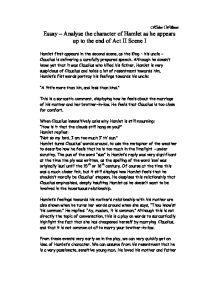 Analyse the character of Hamlet as he appears up to the end of Act II Scene I.

Helen Williams Essay - Analyse the character of Hamlet as he appears up to the end of Act II Scene I Hamlet first appears in the second scene, as the King - his uncle - Claudius is delivering a carefully prepared speech. Although he doesn't know yet that it was Claudius who killed his father, Hamlet is very suspicious of Claudius and holds a lot of resentment towards him. Hamlet's fist words portray his feelings towards his uncle: "A little more than kin, and less than kind." This is a sarcastic comment, displaying how he feels about the marriage of his mother and her brother-in-law. He feels that Claudius is too close for comfort. When Claudius insensitively asks why Hamlet is still mourning: "How is it that the clouds still hang on you?" Hamlet replies: "Not so my lord, I am too much I' th' sun." Hamlet turns Claudius' words around, to use the metaphor of the weather to describe how he feels that he is too much in the limelight - under scrutiny. ...read more.

He loved his mother and father dearly and is very hurt by the new marriage. This is displayed as he speaks to his mother very formally and coldly: "I shall do my best to obey you Madam." His remarks are very quick-witted and meaningful, sometimes rhetorical - showing he is a man of intelligence and is very expressive of his feelings. He uses a range of metaphors to describe how he feels about other subjects other than that of conversation. ("Common"). Although we as the audience know Hamlet to be fond of expressing his feelings, this is a much criticised point in the play. T S Eliot for example wrote one of the most famous essays on Hamlet, yet it was one of the most critical. He described the play as an artistic failure because Hamlet's feelings are given inadequate explanation. However, I think that the play is artistic in this way, yet not a failure, as the audience is left to make up their own explanation of how Hamlet is feeling. ...read more.

We can draw a parallel to this: Hamlet thinks that although Claudius wears the clothes of a king, and sits on the throne - he is not the true king. There is also a third meaning to this conversation, he could be trying to explain that his black attire scarcely shows how immense his sorrow is; his true emotions run much deeper than can be expressed by the petty decision of what to wear. Hamlet detests the farce that is going on in the court, and refers to this with another play on words: "These indeed seem, / For they are actions that a man night play." The word "seem" is particularly notable, as it clearly defines the lie that is the court of Denmark. It is ironic that Hamlet later decided to 'play' the role of a mad man. Hamlet begins to be quite a complicated character to analyse because of the "antic disposition," and therefore the most effective way of doing so is to concentrate on his asides as well as his actions. It is remarkable that his first thoughts are suicide, and that he quickly dismisses this option because of his loyalty to Christianity. ...read more.