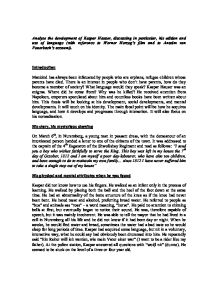 Analyse the development of Kaspar Hauser, discussing in particular, his edition and use of language (with reference to Werner Herzog's film and to Anselm von Feuerbach's account).

Analyse the development of Kaspar Hauser, discussing in particular, his edition and use of language (with reference to Werner Herzog's film and to Anselm von Feuerbach's account). Introduction Mankind has always been infatuated by people who are orphans, refugee children whose parents have died. There is an interest in people who don't have parents, how do they become a member of society? What language would they speak? Kaspar Hauser was an enigma. Where did he come from? Why was he killed? He received attention from Napoleon, emperors speculated about him and countless books have been written about him. This thesis will be looking at his development, social developments, and mental developments. It will touch on his identity. The main focal point will be how he acquires language, and how it develops and progresses through interaction. ...read more.

He walked as an infant only in the process of learning. He walked by placing both the ball and the heel of the foot down at the same time. He had an abnormality of the bone structure of the knee as if the knee had never been bent. He hated meat and alcohol, preferring bread water. He referred to people as "bua" and animals ass "ross" - a word meaning, "horse". He paid no attention to chiming bells at first, but eventually began to notice their sound. He was, therefore capable of speech, but it was mainly incoherent. He was able to tell the mayor that he had lived in a cell in Nuremberg all his life and he did not know if it had been day or night. ...read more.

Language Acquisition Children acquire language at a very young age. Most children speak in relatively complex sentences by the age of about two. The inputs are in the environment of the child, the people it interacts with, the parent's speech to it. Language must be learned, it cannot be a module, and thinking is a form of verbal behaviour that is why we cannot remember anything before we learned to speak. It has been said that the mind before you learn to speak is like a dry sponge ready to absorb. Language is an absorption process. Kaspar Hauser contradicts beliefs that the memory doesn't record anything until verbal communication is established. He puts forward the idea that memory is constantly recording; only when verbal communication is established can you express what it has recorded. When Kaspar's verbal skills progress he can shed some light as to where he has come from. ...read more.