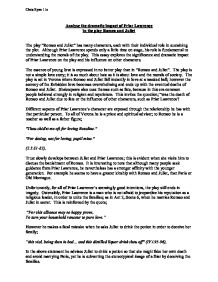 Analyse the dramatic impact of Friar Lawrence in the play Romeo and Juliet The play "Romeo and Juliet" has many characters, each with their individual role in sustaining the plot. Although Friar Lawrence spends only a little time on stage, his role is fundamental to understanding the morals of the play. This essay explores the significance and dramatic impact of Friar Lawrence on the play and his influence on other characters. The essence of young love is expressed in no better play than in "Romeo and Juliet". The play is not a simple love story; it is as much about hate as it is about love and the morals of society. The play is set in Verona where Romeo and Juliet fall instantly in love at a masked ball; however the secrecy of the forbidden love becomes overwhelming and ends up with the eventual deaths of Romeo and Juliet. Shakespeare also uses themes such as fate, because in this era common people believed strongly in religion and mysticism. ...read more.

This is reinforced by the quote; "For this alliance may so happy prove, To turn your household rancour to pure love." However he makes a fatal mistake when he asks Juliet to drink the potion in order to deceive her family; "this vial, being then in bed... and this distilled liquor drink thou off" (IV.i.95-96), In the above statement he advises Juliet to drink a potion so that she might fake her own death and avoid marrying Paris, yet he is subverting the stereotypical image of a friar by deceiving the families. Friar Lawrence does not appear to be a prudent individual, e.g., when he marries Romeo and Juliet in secrecy, he does not consider the consequences of his actions which will be inflicted on the two young lovers. Unfortunately he did not predict the quarantining of Friar John who was unable to deliver the critical message of Juliet's feigned death. As well as a religious adviser and confidante, Friar Lawrence was also a chemist and drew parallels between this profession and his philosophies on life. ...read more.

Friar Lawrence's instinctive reaction to the marriage of Romeo and Juliet was both perceptive and negative; Romeo: "O let us hence! I stand on sudden haste." Friar: "Wisely and slow. They stumble that run fast." However he purposely changed his opinion, once he realised there was an opportunity to obtain reconciliation between the two feuding families. Friar Lawrence clearly has a dramatic impact on the outcome of the play because his advice misguides the young lovers, who have little experience of life and its pitfalls. He was on a moral crusade because he saw the breakdown in families as disruptive to the fabric of society and this drove him to put the unity of the families above the interests of Romeo and Juliet. This is vividly demonstrated when he deceives the families for their own good, by faking the death of Juliet and by marrying the young lovers in secret. Shakespeare ends the play with the reconciliation of the families and the disclosure to the public of the unfortunate events. He uses Friar Lawrence as a conduit to reflect his views on the morals of society. ?? ?? ?? ?? Chris Ryan 11a ...read more.