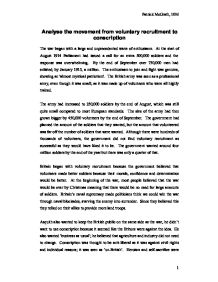 Analyse the movement from voluntary recruitment to conscription

Analyse the movement from voluntary recruitment to conscription The war began with a large and unprecedented wave of enthusiasm. At the start of August 1914 Parliament had issued a call for an extra 500,000 soldiers and the response was overwhelming. By the end of September over 750,000 men had enlisted; by January 1915, a million. The enthusiasm to join and fight was genuine, showing an 'almost mystical patriotism'. The British army was seen as a professional army, even though it was small, as it was made up of volunteers who were all highly trained. The army had increased to 350,000 soldiers by the end of August, which was still quite small compared to most European standards. The size of the army had then grown bigger by 450,000 volunteers by the end of September. The government had planned the amount of the soldiers that they wanted, but the amount that volunteered was far off the number of soldiers that were wanted. Although there were hundreds of thousands of volunteers, the government did not find voluntary recruitment as successful as they would have liked it to be. The government wanted around four million soldiers by the end of the year but there was only a quarter of that. Britain began with voluntary recruitment because the government believed that volunteers made better soldiers because their morale, confidence and determination would be better. At the beginning of the war, most people believed that the war would be over by Christmas meaning that there would be no need for large amounts of soldiers. ...read more.

When a Pals Battalion went into action it could easily suffer from heavy casualties. On the first morning of the Battle of Somme, units that were ordered to charge on enemy trenches had 70 per cent of their men killed or seriously wounded. What made this whole idea a mistake was the fact that local areas in Britain could lose its military-aged men in a single day. As the war progressed, the amount of volunteers each month decreased. At the front there were more casualties and deaths by February 1915, and newspapers were publishing this information for the British public to see. They were printing lists of all the people who died and were wounded. The government did not want people to find out about all the deaths and casualties so they banned all of these types of lists. The newspapers reacted with this by leaving blank spaces where the lists would have been. This was one of the reasons in why the amount of volunteers decreased. Since many people had already joined up, there were more available jobs for the rest of the unemployed, who were willing to say at home and earn a higher wage than to volunteer for the war. The government reacted to the decreasing amount of volunteers by creating posters which were more direct than before. They also tried to use women to put pressure on their husbands and brothers by using slogans such as: 'Women of Britain say go'. ...read more.

As the war progressed, more and more soldiers were getting killed. In July 1917, British citizens living abroad and also Allied citizens living in Britain were allowed to be conscripted thanks to the Military Service Act - Conventions with Allied States. Four months later The Ministry of National Service was formed; having the authority to cancel exemptions on occupational grounds. In 1918, Britain was in dire need of more soldiers, especially as Russia had dropped out due to their own problems. In February the age limit was raised to 50 and if needed, it could be raised up to 56. Soon after it was then also made compulsory for Irish men to join the war. As the war was coming to its end, the minimum age of exemption was raised to 23. This was the Military Service Act II. Conscripts were absolutely vital to the war efforts because without them there would have been a much harder war for the Allies as it could have affected the actual outcome of the war. The Allies could have struggled without the men provided through conscription in Britain; it could have cost them the war if it was not introduced. Conscription in Britain not only helped the war, it also marked the lowering of the remaining barriers of prejudice to the full-scale employment of women. Although it was seen as 'un-British'; bringing conscription managed to change the attitudes of the general public as it actually showed them how it would help, as it provided more power for the Allies so they could defeat the enemy. Patrick McGrath, 10M 1 ...read more.