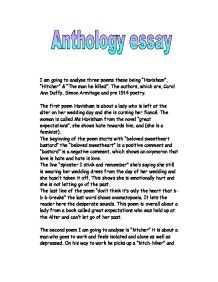 I am going to analyse three poems these being "Havisham", "Hitcher" & "The man he killed". The authors, which are, Carol Ann Duffy, Simon Armitage and pre 1914 poetry. The first poem Havisham is about a lady who is left at the alter on her wedding day and she is cursing her fianc�. The woman is called Ms Havisham from the novel "great expectations", she shows hate towards him, and (she is a feminist). The beginning of the poem starts with "beloved sweetheart b*****d" the "beloved sweetheart" is a positive comment and "b*****d" is a negative comment, which shows an oxymoron that love is hate and hate is love. ...read more.

On his way to work he picks up a "hitch-hiker" and feels envious towards him, because the hitch hiker is free and doesn't need to go to work and so on. "one more sick note, mister and you're finished, fired" that line shows that he has taken a few days off and if he doesn't return to work he is fired, and the hitcher doesn't have to go anywhere at a certain time, that's why the man feels envious of the hitcher. "I let him have it, on the top road out of Harrogate-once with the head ....... I dropped it into third" he is talking about the car and what speed or gear it is in. ...read more.

If link everything up you would know it was about war. This poem is very different compared to "Havisham" & "Hitcher" because they are about, people who want to be free and letting go of their past but yet "The man he killed" is about war. "Havisham" & "Hitcher" are similar because Carol Ann Duffy & Simon Armitage put in language which is Standard English and they use onomatopoeia to let the reader feel the atmosphere of the poem. Also in these two poems their characters were upset, depressed and won't let go of their past, and both characters from Havisham and Hitcher wanted to be free. For conclusion, Havisham and Hitcher are similar but the man he killed is different. ...read more.