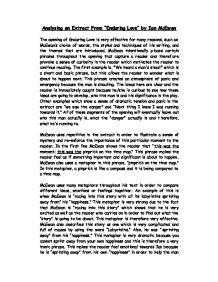 Analysing an Extract From "Enduring Love" by Ian McEwan The opening of Enduring Love is very effective for many reasons, such as McEwan's choice of words, the styles and techniques of his writing, and the themes that are introduced. McEwan intentionally places certain phrases throughout the opening that capture a reader and therefore provoke a sense of curiosity in the reader which motivates the reader to continue reading. The first example is, "We heard a man's shout" which is a short and basic phrase, but this allows the reader to wonder what is about to happen next. This phrase creates an atmosphere of panic and emergency because the man is shouting. The ideas here are clear and the reader is immediately caught because he/she is curious to see how these ideas are going to develop, who this man is and his significance in the play. Other examples which show a sense of dramatic tension and panic in the extract are "we saw the danger" and "Next thing I knew I was running towards it." ...read more.

This metaphor is therefore very effective. McEwan also describes this story as one which is very complicated and full of mazes by using the word "Labyrinths." Also, he was "sprinting away" from his "happiness." This metaphor is very dramatic because you cannot sprint away from your own happiness and this is therefore a very ironic phrase. This makes the reader feel emotional towards Ian because he is "sprinting away" from his own "happiness" in order to help the man who is shouting and seems to be in danger. McEwan uses other metaphors in order to compare the weather with loud and unpleasant sounds. An example of this is when McEwan describes "the wind that roared." This metaphor is a very strong metaphor because it describes the wind with the sound of roaring which is generally a sound which is made by a lion. The reader then begins to feel that there is an element of mystery in the text as a feeling that something bad and eerie is about to take place. ...read more.

Many sounds are used in the extract in order to convey an atmosphere of panic and to build up tension in the story. As well as the sounds which I have already mentioned in the first paragraph, McEwan describes a "child's cry" which is "enfeebled by the wind." These examples of sounds are very sensational. This is because a child's cry is being described and the child's cry is followed by the "man's shout." McEwan then describes that the child's cry is "enfeebled by the wind" which is very effective because it shows the word enfeebled implies that something is being weakened and the child is probably young, weak and cannot defend himself. Finally, the Rule Of Three is used in order to emphasize the buzzard (eagle's) movements. McEwan explains that the buzzard was "soaring, cricling" and "dipping." These words are most effective in describing the eagle's swift movements because they contrast the eagle's gentle movements with the shouting and crying which were described earlier on in the extract. This makes the reader feel that there is an element of peace in the extract after all! By Marina Soltan Words= 924 ...read more.