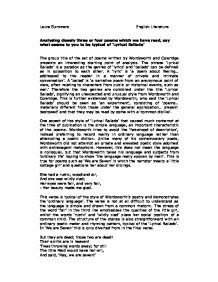 Analysing closely three or four poems which we have read, say what seems to you to be typical of 'Lyrical Ballads'

Laura Summers English Literature Analysing closely three or four poems which we have read, say what seems to you to be typical of 'Lyrical Ballads' The group title of the set of poems written by Wordsworth and Coleridge presents an interesting starting point of analysis. The phrase 'Lyrical Ballads' is a paradox as the genres of 'lyrics' and 'ballads' can be defined as in opposition to each other. A 'lyric' is 'a poem about feeling... addressed to the reader in a manner of private and intimate conversation'. A 'ballad' is 'a narrative poem from an anonymous point of view, often relating to characters from public or historical events, such as war.' Therefore the two genres are combined under the title 'Lyrical Ballads', signifying an unexpected and unusual style from Wordsworth and Coleridge. This is further evidenced by Wordsworth, who said the 'Lyrical Ballads' should be seen as 'an experiment', consisting of 'poems... materially different from those under the general approbation... present bestowed' and that they may be read by some with a 'common dislike'. One aspect of the style of 'Lyrical Ballads' that caused much contempt at the time of publication is the simple language, an important characteristic of the poems. Wordsworth tries to avoid the 'falsehood of description', instead preferring to record reality in ordinary language rather than attempting a poetic diction. ...read more.

In 'We are Seven' and 'Anecdote for Fathers' the children are unafraid to express their emotions even when faced with the adults' rational arguments. There is an emphasis on the senses in the 'Lyrical Ballads', for example in the first stanza of 'We are Seven' the narrator describes the Maid to 'feel its life in every limb'. This line displays the concept of the paradox between body and the spirit evident in the differing views of the Maid and the narrator. Whilst the Maid can still feel the life of her dead siblings and continues to accept them in her everyday life 'And there upon the ground I sit - / I sit and sing to them', the narrator cannot conceive the presence of the spirit within the body after death. The verb 'feel' shows an internal belief for the Maid. Furthermore the poem 'Lines Written in Early Spring' is the appreciation of nature on the senses. I heard a thousand blended notes, While in a grove I sate reclined, In that sweet mood when pleasant thoughts Bring sad thoughts to the mind. The pleasure the narrator receives from nature is through his senses whilst sat in a 'grove'. However, the enjoyment is from the smaller and often overlooked parts of nature, such as the 'primrose' and the 'periwinkle'. ...read more.

Instead, the farmer is advised to sell his sheep resulting in the loss of his flock and an emotional breakdown. This criticism is also evident in 'Simon Lee' as the old huntsman has no provisions for his old age, despite his participation in the hunts. Once he could no longer partake in the hunts he cannot be self sufficient as he has nothing to live on except a 'scrap of land'. Simon Lee is 'forced to work' in spite of his age and frailty and has a lack of knowledge about 'husbandry or tillage'. There are many characteristics that permeate throughout each of the poems in the 'Lyrical Ballads' creating a style fundamentally associated with Wordsworth. These qualities have a number of different intentions, for example the simple language and the reference to ordinary life do not alienate readers from a less educated background. Wordsworth's intention was for his poetry to be inclusive and the 'Lyrical Ballads' are infused with ordinary life, responses to loss, growing old and the fear of death. The poems also celebrate a view of rural life and nature as a solution to industrialisation. Consequently, whilst many of the poems aim to engage readers for entertainment purposes, some poems, such as 'Last of the Flock' and 'Simon Lee' not only offer a story of ordinary life but they provide political protests on the provisions for the poor and the old. ...read more.