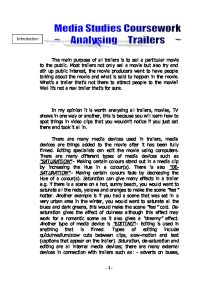 The main purpose of all trailers is to sell a particular movie to the public. Most trailers not only sell a movie but also try and stir up public interest, the movie producers want to have people talking about the movie and what is said to happen in the movie. What's a trailer that's not there to attract people to the movie? Well it's not a real trailer that's for sure. In my opinion it is worth analysing all trailers, movies, TV shows in one way or another, this is because you will learn how to spot things in video clips that you wouldn't notice if you just sat there and took it all in. There are many media devices used in trailers, media devices are things added to the movie after it has been fully filmed. Editing specialists can edit the movie using computers. There are many different types of media devices such as "SATURATION":- Making certain colours stand out in a media clip by increasing the Hue in a colour(s). There is also "DE-SATURATION":- Making certain colours fade by decreasing the Hue of a colour(s). Saturation can give many effects in a trailer e.g. if there is a scene on a hot, sunny beach, you would want to saturate all the reds, yellows and oranges to make the scene "feel" hotter. Another example is if you had a scene that was set in a very urban area in the winter, you would want to saturate all the blues and dark greens, this would make the scene "feel" cold. De-saturation gives the effect of dullness although this effect may work for a romantic scene as it also gives a "dreamy" effect. Another type of media device is "EDITING":- Editing is used in anything that is filmed. Types of editing include quick/medium/slow cuts between clips, slow-motion and text (captions that appear on the trailer). ...read more.

This is again proved by the next shot which is of Daniel sitting in the same chair he started sitting in and in the same prison he started in. The next images are of the distributors - in this case "Warner Bro's Company" and "Village Roadshow Pictures"- flickering to give the effect of being screened on an old film projector, this is saturated in blue. There is then a large Birdseye view of Las Vegas giving the impression that the movie will be set on a large scale. In the trailer for Ocean's Eleven, the director has used text (like in Romeo and Juliet), all the text used is in a basic font in block capitals encased in large ovals, these ovals are bright and every contrasting in colour e.g. orange and blue. The text used says: "TO TRY IT, WOULD BE CRAZY" "TO DO IT, WOULD BE IMPOSSIBLE" "THERE ARE A DOZEN REASONS WHY IT WOULDN'T WORK" "AND ELEVEN GUYS" "WHO DON'T CARE" Subsequent to each piece of text, are clips that have been carefully chosen to be used in the trailer because they explain the main plot to the audience. All of the shots used are saturated in some ways, all the night-time/dark shots are saturated with dark blue or dark greens whereas the outdoor/more lit images are saturated with yellows, oranges and generally lighter toned colours. Most of the clips fit into the categories of having medium shots or close-ups, within these categories, there are shots which are mainly eye-level shots or low angle shots. The lighting in this trailer stays somewhat constant with the main three lights used: The Key Light - The main light source and the most powerful The Fill light - This is used for lighting up the areas that create shadows The Back Light - This light makes the shot look more three dimensional by separating the background from the foreground. ...read more.

The things that are revealed to the audience are what they all aim to achieve and the relationships between all the characters. I think that the decision of giving away a lot of the plot was made so that the audience has the chance of deciding whether they will like to watch this movie or not. I have chosen Romeo and Juliet to be the least effective trailer; this is because although the first section is eye catching, it doesn't keep you interested so the audience may lose focus on the trailer. I have devised a new opening sequence which is hopefully more eye catching and gripping. In my new sequence, music will be played in the background which sets a mood that is in the middle of the second and third section, this music will be by Radiohead and is called "Talk show host". There will be no voice over as there will be text on the screen. I think the trailer for Romeo and Juliet is quite good because it focuses on all the aspects of the movie, these aspects are: love, hate, conflict, pain and tragedy. All of these aspects are put across very well as they are not to subtle but not to easy to spot. There is only one part of the Romeo and Juliet trailer that is not as effective as it should have been which was the opening sequence, this was rather disappointing because the sequence just didn't hold as much interest as it should of done, consequently it didn't keep the audience focused on the rest of the trailer, it was section one that I chose to re-devise. I thought that the "Ocean's Eleven" trailer was very good, the best out of the two because the director put across the plot to the audience perfectly. The choice of images that were used was exactly right so that just about enough was told about the plot, I think the way visual effects were use was very effective. I liked the way the characters personalities and relationships were communicated to the audience. - 1 - ...read more.