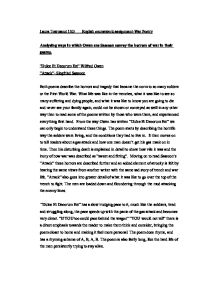 Analysing ways in which Owen and Sassoon convey the horrors of war in their poems.

Laura Townsend 11G English coursework assignment-War Poetry Analysing ways in which Owen ans Sassoon convey the horrors of war in their poems. "Dulce Et Decorum Est" Wilfred Owen "Attack"- Siegfried Sassoon Both poems describe the horrors and tragedy that became the norm to so many solders or the First World War. What life was like in the trenches, what it was like to see so many suffering and dying people, and what it was like to know you are going to die and never see your family again, could not be shown or conveyed as well in any other way then to read some of the poems written by those who were there, and experienced everything first hand. From the way Owen has written "Dulce Et Decorum Est" we can only begin to understand these things. The poem starts by describing the horrific way the solders were living, and the conditions they had to live in. It then moves on to tell readers about a gas attack and how one man doesn't get his gas mask on in time. Then his disturbing death is explained in detail to show how vile it was and the irony of how war was described as "sweet and fitting". Moving on to read Sassoon's "Attack" these horrors are described further and an added element of atrocity is felt by hearing the same views from another writer with the same sad story of trench and war life. ...read more.

The air is thick and green. It is thick with chemicals from the gas that clogs up the air around the soldiers. The fact that the air is green shows that the atmosphere may be alien, like the men have gone into another world. Then the surroundings of the men become uncovered," As under a green sea" which brings images of the thick smog that was created and is a simile which links to the word "drowning" describing the lack of oxygen to the man with no helmet as he sinks and suffocates in the gas. The next two lines are set apart from the rest because the poet changes the time and forwards to the future and Owens's memories. The lines could also be set apart to show that they are important. It is Owen's personal account of how the event has changed him and how he still remembers what happened on that fateful night. "In all my dreams, before my helpless sight. He plunges at me, guttering, choking, drowning." Owen is haunted by the memory of the man dying. It haunts all his dreams. The emphasis on ALL his dreams, not some of them, all of them, adds to the pain Owen must feel at reminiscing these times. The use of commas in this line suggests Owen watching the dreams again in slow motion. He seems to have a great fear of the gas attacks when he talks of them. ...read more.

They "jostle" and "climb" showing the struggle they faced as they climbed to meet the "bristling fire" which is a use of onomatopoeia meaning the gunfire. As the men go over the top of the trench their faces are "masked with fear" and "time ticks blank on their wrists" meaning that time still goes on but it doesn't matter as the men are most probably going to die whatever. Personification is used in "hope, with furtive eyes" giving hope personal qualities, and showing the great desire for hope. The word "Flounder" appears in both of the poems I have chosen to look at. In "Attack"- "Flounders in mud" and in "Dulce Et Decorum Est"- "Floundering like a man in fire or lime". This is a strong word meaning a great struggle, and is also has a harsh disturbing sting to it. The poem ends with a plea, a heartfelt prayer, "O Jesus, make it stop!" This makes readers see more and understand more of this tragic war and what feelings the soldiers felt. Laura Townsend 11g page 6 As mentioned, both poems describe the horrors and tragedy that became the norm to so many solders or the First World War. Owens's poem is an account of what he saw and he is telling us a story, where as Owen is written in a more factual way, telling readers how trench life was like. The poems bring across the true story and atmosphere of how life was for the solders and how grateful we should be to them for fighting for us and keeping our country alive. ...read more.