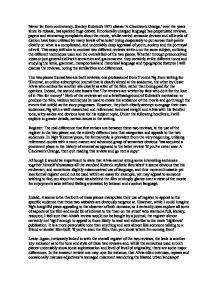 Never far from controversy, Stanley Kubrick's 1971 classic 'A Clockwork Orange,' over the years since its release, has sparked huge debate. Emotionally charged language has perpetuated reviews, papers and simmering complaints about the movie, whilst varied semantic devices and all levels of diction have been utilized by many levels of 'scholar' trying desperately to put across their points clearly on what is a complicated, and undeniably deep appraisal of youth, society and the portrayal of evil. This essay will aim to contrast two different reviews written on the same subject, outlining the different techniques used and the overall feel of the two pieces. Whether through preconceived ideas or just general skill with semantics and grammar etc. they certainly strike different tones and studying the lexis, grammar, metaphorical and rhetorical language and typographic features I will discuss the reviews, noting the similarities and differences. The two pieces themselves are both reviews, one professional from Yvonne Ng from writing for 'Kinema', an online subscription journal that is clearly aimed at the academic, the other by Cesar Alvia who scribes for another site clearly as a fan of the film, rather than being paid for his opinions. Indeed, the second site boasts that 'The reviews are written by fans who do it for the love of it- Not for money! ...read more.

and could be of interest to the 'man on the street' who wanted a full, literary, resource, I feel sure that Alvia's review would not be bought by a journal, the register almost certainly not 'tight' enough to appeal to those likely to read and subscribe to the more 'highbrow' publication. It is a more personable tone than anything and acts almost like someone talking to a friend or similar film buff. 'If you've seen the film, then you know where I'm coming from' Lexis: Again, intricately linked in with the overall register of the two reviews, the lexis is another key indicator as to the tone and style of these two reviews and, while the semantics used in both pieces undeniably show some sophistication and level of level of originality, there are some major differences. In the amateur review one may note for instance, that Alvia often overuses, repeats and occasionally misuses adjectives 'a teenaged miscreant wandering the blasted urban landscape' giving an enthusiastic yet 'slack' feel to the piece. As well as this, he uses a lexical set of familiar terms and phrases to engage the reader; 'And that's where we find,' 'I only hope that you all can indulge me' pitching him as the jovial, and certainly humorous, fanatic happy to share his experiences of the film. ...read more.

Metaphorical & Rhetorical Language: There is no doubt in my mind that a successful review will certainly contain a degree of metaphorical language and to some extent both authors indulge in such practice; 'The result is a graceful ballet of athletic prowess' and 'moral theme buried at its heart' are just two examples. Such technique is vital to add a glittering originality to the reviews and imbue visions of cinematic action into the heart of the reader, and there is no doubt that Ng has provided some interesting metaphors amongst the flowing text, and whilst occasionally possibly stretching the relevance in her point, and thus perhaps cheapening the image that she produces, as in this example, 'the red-haired Mrs Alexander becomes an animated version of the white female statues at the Korova' adds much to her reviews through these techniques. Although once again, it would be fair to admit there is not as much candid metaphor in the amateur review, and it could be said to contain a fair amount of bombastic rhetoric, this ambivalent style once again characterises the informal and personal approach that the reader looking for entertainment may well prefer. Hyperbole, or at least potentially naive opinion, is certainly evident 'While all of the man's films were incredible,' oxymoron's perpetuate the description of the protagonist Alex, but actually may well be necessary when writing about his split personality. ...read more.