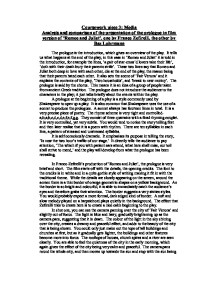 Analysis and comparison of the presentation of the prologue in film version of 'Romeo and Juliet', one by Franco Zefirelli, the other by Baz Luhrmann

Coursework piece 3: Media Analysis and comparison of the presentation of the prologue in film version of 'Romeo and Juliet', one by Franco Zefirelli, the other by Baz Luhrmann The prologue is the introduction, which gives an overview of the play. It tells us what happens at the end of the play, in this case in 'Romeo and Juliet' it is told in the introduction, for example the lines, 'a pair of star-cross'd lovers take their life', 'doth with their death bury their parents strife'. These two lines say that Romeo and Juliet both deep in love with each other, die at the end of the play, the reason being that their parents hated each other. It also sets the scene of 'Fair Verona' and it explains the contents of the play, 'Two households', and 'break to new mutiny'. The prologue is said by the chorus. This means it is an idea of a group of people taken from ancient Greek tradition. The prologue does not introduce the audience to the characters in the play; it just talks briefly about the events within the play. A prologue at the beginning of a play is a style commonly used by Shakespeare to open up a play. It is also common that Shakespeare uses the use of a sonnet to produce the prologues. A sonnet always has fourteen lines in total. It is a very precise piece of poetry. The rhyme scheme is very tight and controlled- a,b,a,b,c,d,c,d,e,f,e,f,g,g. They consist of three quatrains with a final rhyming couplet. It is very controlled, yet very subtle. You would tend to notice the story telling first and then later realise that it is a poem with rhythm. There are ten syllables in each line, a pattern of stressed and unstressed syllables. It is self consciously dramatic. It emphasises its purpose in telling the story, 'Is now the two hour's traffic of our stage.' ...read more.

While the newsreader is saying the prologue, the camera subtly zooms in directly towards the screen, and the picture in the corner gradually comes into focus. The picture is of a broken ring with the text underneath it saying 'Star cross'd lovers'. The symbolism of the broken ring is that the lovers end up being torn away from each other. After the newsreader says the twelfth line of the prologue, the camera suddenly picks up speeds and zooms right into the TV screen, through a high street. At the same time the words, 'Fair Verona' constantly flashes up in white with a black background. From the zooming, it has merged from one background into another. This sudden pick up of speed would as if wake up the audience and shocking them as the screen had suddenly gone from one shot to another. This is very unlike Zefirelli's presentation of the prologue, as he keeps his prologue simple and calm all the way through, whereas Luhrmann uses the effect of zooming and flashing words up creating a dramatic scene. The reason of flashing the words, 'Fair Verona' while the camera rushes down the high street, is to make the audience understand the comparison and realise exactly how 'fair' Verona really is in his version of the film. It shows a decaying urban landscape contradicting 'fair Verona'. The font style of the writing is bold like Arial, and is in block capitals, making it clear to the audience what it says. In Zefirelli's, as the camera pans over the city, you can see that Verona is very pretty and fair, as the prologue says it is. As the camera reaches the end of the street, the camera is suddenly focused on the face of a statue, which was far in the distance from where the zooming into the street began. Very dramatic music starts to be played loudly, which produces a bigger effect on grabbing the audience's attention. ...read more.

There was one more series of fast moving clips and a rush of lines as a final wind up to the prologue. There are a variety of different clips of things that happen from the beginning of the play to the end. The repeating of the clips again and again produce permanent images into the minds of the audience. The prologue ends with the words 'take their life' and move onto the first act. The words 'take their life' are stated to tell the audience that the story line would conclude with something relevant to it. I think that it is a new technique Luhrmann has used. He uses the technique of grabbing the attention of the audience and makes them concentrate. The prologue being reinforced by being presented for the third time, does not makes the audience get bored and tire of the clips being seen and seen again, but make them more excited about the film. I think that both Zefirelli and Luhrmann were trying to represent 'Romeo and Juliet' in a different way, with different techniques. The prologue was of course interpreted differently. Zefirelli presented the prologue in his production in a gentle and calm way all the way through giving the audience a good idea of the peace and beauty of Verona. Luhrmann of course presented the prologue in a different way, almost a complete contrast to what Zefirelli did. He changed 'Fair Verona' into urban sprawled Verona. I think that the presentations of the prologue were both appropriate for their interpretations because Zefirelli wanted to keep his production of 'Romeo and Juliet' original and alike Shakespeare. Luhrmann wanted to interpret the play into something slightly more modern and unlike Shakespeare's original version. In Luhrmann's production he emphasised the complications between the two households and the alterations he had made to the film, like how he set his production in an urban city and called it 'Verona Beach' instead of setting it in the original city of Verona in Italy. ...read more.