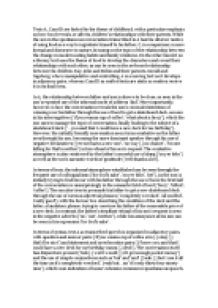 Analysis of 3 texts on Childhood

﻿Texts A, C and D are linked by the theme of childhood, with a particular emphasis on how food reveals, or affects, children?s relationships with their parents. While the son in the spontaneous conversation transcribed in A has the ulterior motive of using food as a way to ingratiate himself to his father, C, in comparison is more formal and discursive in nature, focusing on the topic of the relationship between the change in modern eating habits and family relations. On the other hand, D as a literary text uses the theme of food to develop the characters and reveal their relationships with each other, as can be seen in the awkward relationship between the children, Kay, John and Robin and their parents, Gerald and Ingeborg, who is manipulative and controlling. A is a moving text as it develops in adjacency pairs, whereas C and D as crafted texts are static as readers receive it in its final form. In A, the relationship between father and son is shown to be close, as seen in the son?s repeated use of the informal mode of address ?dad?. More importantly, however, is how the conversation reveals the son?s concealed intention of winning over his father through the use of food to get a skateboard deck, as seen in his interrogatives (?d?you wanna cup of ...read more.

Unlike A, which has more informal lexis with colloquialisms, C uses a modified formal register with more formal esoteric lexis (?consumption?, ?subsidiary?, ?communicate?) common in texts of a discursive genre, and high frequency lexis (?eat?, ?fatter?, ?traffic?). The purpose of C, that is to inform, can be seen through the abundant use of concrete nouns (?children?, ?food?, ?teenagers?) to discuss the subject, as well as proper nouns (?Gershuny?, ?Exeter University?, ?University College London?) to establish his sources of information. Numeral adjectives (?fifty-two?, ?2000?, ?one-in-three?) and factual adverbials (?in 1961?, ?8.30 a.m?, ?a generation ago?) are also used to describe supporting facts by research, as well as to give an accurate timeline of the change in habits between the past and the present. However, the writer also uses a hyperbole (?In London you can get into your car?with a reasonable expectation of arriving at your destination the same day?) to emphasise his point that parents frequently drive their children around, as well as a simile (??like pampered pets?) to criticise how children are treated in modern society. C, like A, deals with the topic of food, and as such, is predictably in the semantic field of food (??eat?, ?food consumption?, ?fast foods?). In terms of syntax, Text B as a crafted text is more organised than A, which has looser syntax. ...read more.

Wilson successfully mimics speech in D through the use of direct speech (?And so Robin is a big man now and he chooses smoked salmon,? said Ingeborg??), with the use of reporting verbs and adverbials revealing the characters? moods. In particular, the adverbial of ?with glee? illustrates Robin?s amusement at his sister?s discomfort, whereas the way in which Ingeborg peaks to the waiter ?with mock seriousness? shows the way in which she infantilises her children. The way in which the characters speak also reveals their personalities, and this is seen in Ingeborg?s frequent use of declaratives (?And so Robin is a big man now and he chooses smoked salmon?, ?I?ve ordered her some fried sole?) as well as her rhetorical questions (?Do you think you will like that??, ?Oh, Gerald, my dear, what have you said??) which she uses to control the conversation. Ultimately, while D is different from C with the use of speech representation, A and D are similar in that the speech reveals the speakers? attitudes and personality. However, D is vastly different in that speech is shown to have a dramatic purpose as compared to A, while, on the other hand, the use of direct and indirect quotations in C are used to establish the authoritative voice in the essay. ...read more.