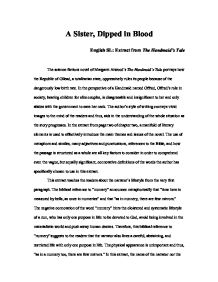 Analysis of an extract from the Handmaids Tale by Margaret Atwood

A Sister, Dipped in Blood English SL: Extract from The Handmaid's Tale The science fictions novel of Margaret Atwood's The Handmaid's Tale portrays how the Republic of Gilead, a totalitarian state, oppressively rules its people because of the dangerously low birth rate. In the perspective of a Handmaid named Offred, Offred's role in society, bearing children for elite couples, is disagreeable and insignificant to her and only abides with the government to save her neck. The author's style of writing conveys vivid images to the mind of the readers and thus, aids in the understanding of the whole situation as the story progresses. In the extract from page two of chapter two, a manifold of literary elements is used to effectively introduce the main themes and issues of the novel. The use of metaphors and similes, many adjectives and punctuations, references to the Bible, and how the passage is structured as a whole are all key factors to consider in order to comprehend even the vague, but equally significant, connotative definitions of the words the author has specifically chosen to use in this extract. ...read more.

The narrator being fully wrapped from head to toe in red leads the readers to hypothesize that this is the narrator's state of being every day: tied up by the laws of the Republic of Gilead which has full authorities to control her life. The strong color of red may be tied with the emotions of anger and rebellion the narrator is experiencing. It is hinted that she doesn't enjoy being in this emotional state as she says that " I never looked good in red, it's not my color". "The color blood which defines us" may also define the color of love, true love the narrator may have experienced in the past, and birth/reproduction, the narrator's only role in society. Also, the references to this color may have the role of revealing the physical and mental states of the narrator which represent the physical and mental states of the rest of the population oppressed by the the Republic of Gilead. The metaphors concerning the nunnery, the similes, " like a path, like a carpet for royalty, it show me the way", "like the ...read more.

This may be due to her reluctance to accept the reality and her longing to return to her past life. The last sentence, "a sister, dipped in blood" is another biblical reference and also a metaphor which explains how she is red from head to toe as if "dipped in blood". There is a sense of exaggeration in this description which is linked to imagery which purposefully aids in the understanding of the readers. The extract begins with alternating descriptions of the narrator's surroundings and the narrator herself, and ends with an intensified mood in the last sentence: "a sister dipped in blood". The main theme introduced in this extract is Gilead's role in society. This totalitarian government is superior towards its people in an excessively oppressive way, and the readers can understand the influences Gilead has on the narrator in the society, physically and mentally. Without directly pinning down the main issue, the author has successfully managed to describe Gilead's role and influence in the society in the eye of a handmaid who strongly describes everything in a vigilant and disagreeable manner. ?? ?? ?? ?? ...read more.