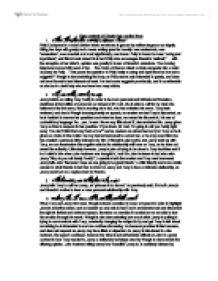 Analysis of chapter two- A handful of dust

Close analysis of Chapter two, section three 1. What is the significance of Polly Cockpurse's name? Polly Cockpurse is a social climber whose smartness is graced by neither elegance nor dignity. Filling her days with gossip and a never ending quest for novelty: new restaurants, new 'bonesetters', new scandals and most significantly, new lovers. Polly is known to mean 'caring and loyal friend', and this is ironic when it is in fact Polly who encourages Brenda's 'walkout'; '... with the exception of her sister's, opinion was greatly in favour of Brenda's adventure. The morning telephone buzzed with news of her... The choice of Beaver raised a whole escapade into a realm of poetry for Polly...' This poses the question- is Polly really a caring and loyal friend as her name suggests? Waugh is demonstrating the irony, as Polly seems only interested in gossip, and does not have Brenda's best interests at heart. Her last name suggests promiscuity, and is considerable as she too is a lurid lady who we know has many affairs. 2. Why does Jenny call Tony Teddy? ...read more.

Jenny tells Tony to call her Jenny, as 'princess is so formal.' As previously said, it is both Jenny's and Brenda's motive to have a more personal relationship with Tony. 4. Identify where the form of the novel changes in this section When Tony and Jenny first meet, Waugh reduces narration is favour of speech in order to highlight Jenny's assertive nature, and as readers we are able to feel Tony's embarrassment and discomfort through his limited and awkward speech, therefore no narration is needed as we are able to feel his emotion through his words. Waugh is also demonstrating how much effort Jenny is putting in trying to communicate with Tony; constantly changing the subject to try and get Tony to talk about something he is interested in and can continue discussing. He however provides limited answers, and does not respond as Jenny may have liked or expected. As Jenny is introduced to John Andrews, the speech continues, however the vibrant and enthusiastic attitude of John is a great contrast to how Tony reacted to Jenny; a deliberate technique used by Waugh to demonstrate the differing opinion. ...read more.

This is ironic as it is in fact Tony who is suppose to be spending time with Jenny and getting to know her better, whereas it is John Andrews who is displaying interest for Jenny; and this is shown once more on pages 92-93, as immediately after John Andrews awakes, he is eager to see Jenny, and asks her to spend the day with him. The 'scene' immediately after this is the conversation between Polly and Brenda who are debating Tony's interest in Jenny, and Brenda is adamant that Tony is not really into her, which is agreed by Tony as in the final 'scene' on page 93 John remains fixed at Jenny's side, with Tony not seeming too fussed he returned home alone. The scenes on page 93 clearly demonstrate how one thing can be interpreted differently, just as John and Tony interpret Jenny differently, Polly interprets Tony and Jenny's relationship as blossoming, where as Brenda has an entirely different opinion. Waugh is representing how speech is a useful tool, as if narration was used here, these differing opinions would not have been as distinct, and amusing to us as readers. ?? ?? ?? ?? ...read more.