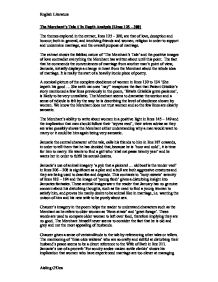 The Merchant's Tale // In Depth Analysis [Lines 125 - 300] The themes explored in the extract, lines 125 - 300, are that of love, deception and honour; both in general, and involving friends and women, religion in order to support and undermine marriage, and the overall purpose of marriage. The extract shows the fabliau nature of 'The Merchant's Tale' and the positive images of love contradict everything the Merchant has written about until this point. The fact that he commends the conveniences of marriage from another man's point of view, Januarie, initially displays a change in heart from the Merchant about the whole idea of marriage. It is really the start of a heavily ironic piece of poetry. A comical picture of the complete obedience of women in lines 130 to 134 'She kepeth his good ... She seith nat ones 'nay'' recaptures the fact that Patient Grisilde's story mentioned a few lines previously in the poem, 'Bitwix Grisildis grete pacience', is likely to be very unrealistic. The Merchant seems to dramatise the section and a sense of ridicule is felt by the way he is describing the level of obedience shown by women. We know the Merchant does not trust women and so the few lines are clearly sarcastic. The Merchant's ability to write about women in a positive light in lines 145 - 149 and the implication that men should follow their 'wyves reed', their wives advise as ...read more.

Here he justifies why he'd commit adultery if his wife was too old, yet he himself is again forgetting he is not in his prime years. The hypocrisy of this is that if a woman committed adultery, it would be a sign of her dishonesty and cunningness and a reason for a man to disown her, yet with men its acceptable. This verse creates force and pressure from the sharpness, determination and strength of the ironies embedded in it. The language is violent 'go straight to the devel, whan I die' when referring to Januaries preference of commit adultery and go to h**l for it rather than live a sexless life on Earth. Both the Merchant and Januarie seem to come alive, and the feeling of the narrator gives pressure to the poetry. The references to the Old Testament are both numerous and dramatic in The Merchant's Tale, a fact which illustrates the narrators understanding of the religious teaching of a Church he followed at the time. The Merchant incorporates this religious understanding by mentioning several women from the bible, who were resourceful and successful, but that also have the theme of deception in common. [Lines 150 - 162]. The passage is composed of four examples from the Old Testament where women helped men. Rebecca, the first of the mentioned women gave advice to her son Jacob and he ended up receiving blessings from his father. ...read more.

Some of his friends agree with him and some disagree. His brother Placebo begins flattering him and saying that he is wise enough, and does not need help from others when deciding about marriage. Line 263 shows the introduction of Placebo, which means 'I shall please', and Justinus who in the poem, conveys a sense of hard well thought-out reasons why Januarie should not marry. The two act as good and evil and allegorise the two opinions passing through Januarie's own mind. Placebo says that like any good adviser, he would never presume to contradict a lord's opinion. He claims he has worked with 'lordes of ful heigh estaat' and he has never argued or gone against any of them. This shows Placebo's loyalty to Januarie and contrasts with a woman's desire to deceive her husband. Placebo compliments Januarie saying 'for youre heighe prudence, to weyven fro the world of Salomon' [270] which shows Placebo advising Januarie to ignore the advise of Solomon, a King from the Old Testament who had a reputation for his wisdom. This is yet another biblical reference and also shows Placebo as Januarie's subconscious forcing him to see marriage as a good thing and justifying marriage to such a young girl. In conclusion, this passage voices opinions of Chaucer, the Merchant and Januarie and explores various themes that show diversity in the views of marriage from these men. It shows also that status influences the way these men view marriage. ?? ?? ?? ?? English Literature Aisling O'Dea ...read more.