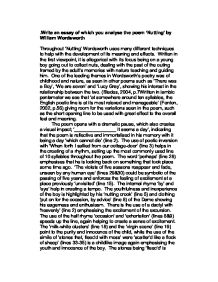 analysis of 'nutting' by wordsworth

.Write an essay of which you analyse the poem 'Nutting' by William Wordsworth Throughout 'Nutting' Wordsworth uses many different techniques to help with the development of its meaning and effects. Written in the first viewpoint, it is allegorical with its focus being on a young boy going out to collect nuts, dealing with the past of the outing framed by the adult's memories with nature teaching and guiding him. One of the leading themes in Wordsworth's poetry was of childhood and nature, as seen in other poems such as 'There was a Boy', 'We are seven' and 'Lucy Gray', showing his interest in the relationship between the two. (Blades, 2004, p.7Written in iambic pentameter we see that 'at somewhere around ten syllables, the English poetic line is at its most relaxed and manageable' (Fenton, 2002, p.56) giving room for the variations seen in the poem, such as the short opening line to be used with great effect to the overall feel and meaning. The poem opens with a dramatic pause, which also creates a visual impact; '________________ It seems a day', indicating that the poem is reflective and immortalised in his memory with it being a day 'which cannot die' (line 2). ...read more.

with the use of enjambment helping to make the poem flow freely. The use of caesura in line 19, 'A virgin scene - A little while I stood' creates a pause, slowing the poem back down, allowing the reader to reflect on the image being created. The man remembers the admiration he felt when he came across the 'dear nook'. (line 14) This is emphasised by the effect of 'breathing with such suppression of the heart' (line 20), a lyrical line which with no punctuation, makes you read faster. The use of the trochee at the beginning of the line with 'breathing' places a greater emphasis on the breath-taking feeling it creates. On reaching the nook, he 'eyed the banquet' (lines 22&23), a metaphor for the bounty of nature, creating an image of the fruitful tree. The enjambment used 'Where fairy water-breaks do murmur on for ever' (lines 31&32) helps the words to flow just like the flowing of a river. The use of the word 'fairy' (line 31) is also reminiscent of a childlike imagination, again linking to the theme of innocence within the poem. ...read more.

and 'been bless'd' (line 26) all brought together by the mention of this Spirit. Wordsworth believed that his poetry would be 'alive with metaphors' (Romantic Writings: An Anthology, p.88, line 276) linking in with the theme of nature being the live 'Spirit' seen in the final line of the poem. Reading this poem at face value we see the story of a boy going out to collect nuts, but Wordsworth cleverly uses the various techniques mentioned to create deeper meanings and feelings within the poem. As a Romantic writer, he was influenced by 'Rousseau's suggestion that civilisation had corrupted humanity's original nobility' (Furniss, and Bath, 2007, p.187) and was concerned with the innocence of children and of connecting back to nature, something we see throughout 'Nutting'. By using blank verse the subject of the poem is elevated, showing its importance. (Approaching Poetry, p.14) The techniques used help the reader to gain more from the poem, seeing deeper into the meanings perhaps not seen at first, emphasising the importance of nature to all who read it. The imagery of nature being used is that of a place of sanctuary to return to which we are being invited to share in the experience. ...read more.