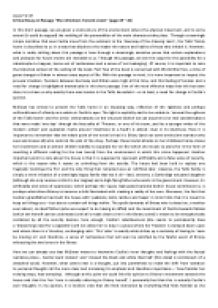 ﻿Joyce To LVI Critical Essay on Passage ?She refreshed?frenetic vision? (page 19 ? 21) In this short passage, we are given a vivid picture of the environment where the physical movement, and to some extent (it could be argued) the molding of the personalities of the main characters take place. Through a seemingly simple narrative that sees Cecilia move from the outdoors to the ?doorway of the drawing room?, the Tallis? family home is described to us in a way that alludes to the reader the nature and habits of those who inhabit it. However, what is really striking about this passage is how through a deceivingly narrative prose that certain explanations and prolepsis for future events are revealed to us. Through this passage, we see the scope for the possibility for a catastrophe to happen, borne out of restlessness and a sense of ?not belonging?. Of course, it is important to note the historical context of the setting of the book. Part Two of the book is concerned with World War Two, a time of great change to Britain in almost every aspect of life. ...read more.

is meant to be metaphorically contained by all the security devices. Sure enough, Cecilia?s rebelliousness (she seems to permanently have a ?blossoming need for a cigarette?) will not allow her to stay in a place where her freedom is clamped down upon and where there is a ?timeless, unchanging calm?. This ?calm? is exactly what strikes up a certainty of having to ?soon be moving on? and therefore, a sense of restlessness that will soon be satisfied by the fateful event of Briony witnessing the two lovers in the library. Here we can already see that McEwan means to intertwine Cecilia?s inner thoughts and feelings with the factual narrative prose - Cecilia ?went indoors? and ?crossed the black and white tiled hall? (this detail is reminiscent of a detached voice). However, what comes next is a thought, put into parenthesis to make the shift from narration to personal thoughts all the more clear and increasing its emphasis and therefore importance ? ?how familiar her echoing steps, how annoying?. Although at this point we could link this opinion to Briony?s resentment towards the house and that the ?her? here is actually referring to Briony herself?, I personally feel that this is actually Cecilia?s own thoughts. ...read more.

This is because light, which is, in theory, transcendent and not restrained by human actions, had to request permission to enter the drawing room. However, light is used as a literal metaphor for the perception of truth ? firstly, it shows the Tallis family as it really is. Of course later, the absence of light, and therefore the absence of truth, means that Briony thinks that Lola?s r****t is Robbie. It is therefore clear that light serves to act as the necessary bridge between ?knowing? and ?being sure?. In conclusion, what is clear in this passage is the need for change. Cecilia obviously feels repressed by her surroundings, and her house illustrates cleverly how the Tallis family is restricting itself by keeping everything literally in ? there is no space to breathe (as shown on page 20, where a single sentence stretches itself over 12 lines from ?her breathing slowed??). We know with foresight that the end of the passage, describing Briony?s artistic frustration with writing and need for excitement that drives her to commit her terrible sin. It is this passage that gives such an ominous sense of an impending disaster through its seemingly carefree and light-hearted words. ________________ [1] In an article written by McEwan himself: McEwan, I. (2001). Mother Tongue. Available: http://www.ianmcewan.com/bib/articles/mother-tongue.html. Last accessed 18th Sep 2012. ...read more.