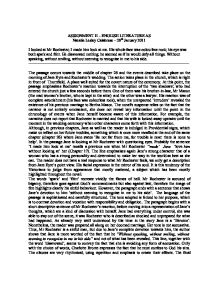 St John Rivers has nearly convinced her into marrying him and feels that she should do confusing moral duty with social convention, Jane runs away from Rochester and herself. Yet, Rochester would defy all. Legal, religious and social laws are put aside. In these lines it is the cry of Jane's most inner part, which places rationality aside to set free her passion. This idea is conveyed by the repetition of the same question 'Where are you?" as if she were hypnotised. Moreover, it sets the tone of the passage, it is meditative and persuasive. This is also aptly conveyed by the use of the repetition of the first-person 'I'. It is herself, who decides on her fate. The optimism of this belief, in which the individual controls his own salvation. The lines continue with an allusion to 'Marsh Glen', as if she is justifying 'the supernatural voice' she has heard, with that of the nature, to which she is so devoted to. Nature not only expresses her feelings but also gives her Providential signs. The passage is filled with imagery drawn from nature and the English countryside. Bronte uses this imagery to suggest her characters' moral condition and state of mind. She uses language successfully to create the world of someone astounded and in profound silence as if keeping her breath trying to listen to any further suggestions. The personification of the 'wind' effectively suggests the way in which the mood can be created by nature or chimes in with mood. ...read more.

When Joshua confesses his crime to God, he is informed that he will be left out of God's benevolence, unless he gets the traitor to confess his guilt. Therefore, Achan admits that he has hidden "a goodly Babylonish garment" beneath his tent. Thereafter, the Israelites punish him for having gone against God, stone Achan and his family to death and then burn their bodies. Rochester, who attempts bigamy, believes that Thornfield Hall is a "tent of Achan" to the extent that it hides the crime's proof (Bertha his wife who is locked up in the attic). Moreover, he does not learn from the story of Achan and is sure he will be able to eschew punishment. Such symbolism is used to convict Rochester of both sin and lack of self-knowledge. Bronte analyses his attitude towards religion, he seems to prefer personal conversion, in which the individual controls his own salvation. At the end Rochester's disability represents a moral resurrection, he is physically blind, but sees and is sure of his love for Jane. Guided by a Jane perceived as a higher being, cures his sinful behaviour and says: 'I thank my Maker that in the midst of judgment He has remembered mercy. I humbly entreat my Redeemer to give me strength to lead henceforth a purer life than I have done hitherto'. In conclusion, Charlotte Bronte uses words of endearment, evokes passion and veneration towards the Byronic Rochester, although does not forget to emphasise the major differences there are between him and the protagonist. He is a earthly hero and is depicted with all his vices and weakness which are linked to men. ?? ?? ?? ?? ...read more.