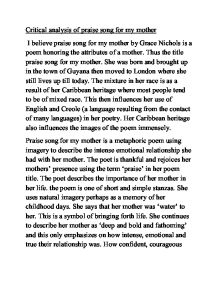 Analysis of poem &quot;Praise song for my mother&quot; by Grace Nichols.

She uses natural imagery perhaps as a memory of her childhood days. She says that her mother was 'water' to her. This is a symbol of bringing forth life. She continues to describe her mother as 'deep and bold and fathoming' and this only emphasizes on how intense, emotional and true their relationship was. How confident, courageous and brave she was and at the same time she was a able to portray the quality of understanding making her easy to talk to. She says her mum was the 'moons eye' to her, representing the light she was unto her path during her dark moments. ...read more.

Warm representing how she soothed her daughter and mantling showing her presence was conveniently everywhere. In the fourth stanza, she uses metaphors influenced by her life in the Caribbean. She describes her mother as 'red gill', A symbol of being fresh and not stale. 'trees spread' a symbol of being a shelter or shade in her life. 'crab's leg/the fried plantain smell', a delicacy in the Caribbean that brought out the goodness in a situation. 'replenishing, replenishing' emphasizing that she only added value to her life. 'go to your wide futures you said' her mother was now sure she could conquer anything. Her daughter was ready for anything in her eyes. She had prepared her enough and was confident that she would make wish it in the world. ...read more.

This essay uses PEE throughout and analyses language and its meaning. Accurate use of literary terminology and some explanation. Ends abruptly and needs a more formal conclusion.