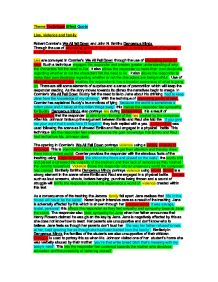 Analysis of Robert Cormiers We All fall Down and John N. Smiths Dangerous Minds.

Cormier provides the responder with the atrocious facts of the trashing using vulgar language 'the s**t on the floors and p****d on the walls' the words s**t and p****d expressed the vulgarity of the trashers and their lack of remorse as they trashed the Jerome household. Violence draws the responder into an unsavoury world the composer has created. Similarly Smiths Dangerous Minds portrays violence using sound. Sound is a strong element in the scene where Emilio and Raul are engaged in a physical battle. Sounds such as loud screams, shouts, lockers banging, punches being thrown and a sound of struggle will terrify the responder and let the experience a world of violence created within this text. As a consequence of the trashing the Jerome family fall apart. Jane realises that 'life in this house will never be the same'. Karen lays in intensive care as a result of the trashing. Jane is adversely affected by this which is shown through her emotive words 'it was savage, brutal, personal' this affects the responder as they feel empathy and sympathy towards Jane the victim. ...read more.

The composers create interesting characters with engaging storylines to draw the responder into these various worlds. The responder feels drawn into these worlds because the composers structure a story where every event is a surprise which leads them to make their own discoveries and draw them into these many worlds. The composers include suspense to maintain the responder's attention and to keep them reading till the very end. In Cormier's We All Fall Down the responder does not discover who the Avenger is till the very end. This keeps the responder reading as they want to find out who the Avenger really is. The responder may have guessed who the Avenger is and want to know if they are correct. The storylines of the characters may relate with the responder. This makes the responder feel empathy and sympathy for the characters and draws them into the worlds created by Cormier and Smith. As demonstrated in Robert Cormier's We All Fall Down and John N. Smiths Dangerous Minds which incorporates lies, violence and family using features such as alternating points of view, juxtaposition, a variety of levels of language, sound, emotive words and dialogue engage the responder and ... ...read more.