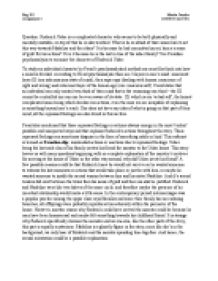 Analysis of Roderick Usher's character in the story &quot;The Fall of the house of Usher&quot;

﻿Eng 301 Maisha Samiha Assignment 3 12303014 (new ID) Question: Roderick Usher is a complicated character who seems to be both physically and mentally unstable; on top of that he is also terrified. What is he so afraid of that causes him to act this way towards Madeline and the others? It is because he had committed incest, hence a sense of guilt for his actions? Or is it because he is the last in line of the usher family? Use Freudian psychoanalysis to examine the character of Roderick Usher. To study an individual character by Freud?s psychoanalytical method one must first look into how a mind is divided. According to Freud psychoanalysis there are 3 layers in one?s mind: innermost layer ID (our subconscious state of mind), then super ego (dealing with human conscience of right and wrong) and outermost layer of the human ego (our conscious self). ...read more.

A few possible reasons could be that Roderick knew he would not survive so he wanted someone to witness the last moments or actions that would take place or just be with him, or maybe he wanted someone to justify the s****l tension between him and his sister Madeline. And if a s****l tension did exist between the twins then his sense of guilt and fear can also be justified. Roderick and Madeline were like two halves of the same circle, and therefore maybe the presence of an incestual relationship would make a little sense. In the contemporary period intermarriages was a popular practice among the upper class royal families and since their family has no enduring branches, all offsprings were probably reproduced incestuously within the perimeter of the house. However, another reason why Roderick could have invited the narrator could be because he may have been h********l and maybe felt something towards his childhood friend. ...read more.

In most cases people inherit such disorders. So if we consider the mental disorder to be genetic, the Freudian slip adds to it and makes it worse, and definitely makes a person totally unstable mentally. The narrator?s description give us an idea of how healthy Roderick used to be once and how his health from what the narrator sees after he goes to the Usher house has gone worse. To sum up Roderick?s character analysis, it can be said, that his disorder is somewhat genetic which is multiplied because of his repressed emotions. What probably made him so scared was people finding out about his past or incestual desires if there were any. And that is why maybe he buried his sister alive, he thought burying the sister would be burying the truth. His sister was the only kin for years alone with him, and since they were halves of the same circle, therefore the incestual relationship does make a little sense. The Freudian slip may have evoked some unusual actions towards his sister resulting into incest. ...read more.