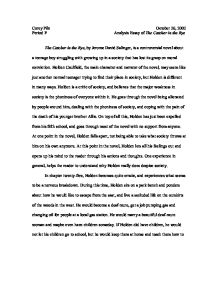 Analysis of The Catcher in the Rye.

Corey Pilz October 26, 2002 Period F Analysis Essay of The Catcher in the Rye The Catcher in the Rye, by Jerome David Salinger, is a controversial novel about a teenage boy struggling with growing up in a society that has lost its grasp on moral conviction. Holden Caulfield, the main character and narrator of the novel, may seem like just another normal teenager trying to find their place in society, but Holden is different in many ways. Holden is a critic of society, and believes that the major weakness in society is the phoniness of everyone within it. He goes through the novel being alienated by people around him, dealing with the phoniness of society, and coping with the pain of the death of his younger brother Allie. On top of all this, Holden has just been expelled from his fifth school, and goes through most of the novel with no support from anyone. At one point in the novel, Holden falls apart, not being able to take what society throws at him on his own anymore. At this point in the novel, Holden lets all his feelings out and opens up his mind to the reader through his actions and thoughts. One experience in general, helps the reader to understand why Holden really does despise society. ...read more.

Nothing will be different, Holden will be working at the gas station while the world will forget about him. Holden wants to live a simple life where society can not cause rapid changes that can cause confusion and conflict among people. Another point made in Holden's fantasy is that he would like to be a deaf-mute and marry a beautiful deaf-mute woman. In Holden's eyes, being a deaf-mute means dealing with people on paper. When talking to a person, eye contact is usually made, but when writing on paper no eye contact needs to be made. Also, when writing on paper no one can tell whether a person is being sarcastic or lying. This for Holden is truly the perfect way for dealing with people. He can get away from all the phoniness of people, and he figures once the get tired of writing on paper they are bound to leave him alone. The reasoning for his thinking is best explained through the quote after Mr. Spencer, Holden's history teacher, claims that life is a game. The quote, "Game, my ass. Some game. If you get on the side where all the hot-shots are, then it's a game, alright-I'll admit that. But if you get on the other side, where there aren't any hot-shots, then what's a game about it? ...read more.

This reason alone would make Holden's fantasy worth living out even if it meant giving up so much. Holden uses his dreams and fantasies as an output for anger most of the time, but there is always a underlying purpose within the fantasies. Holden running away could change his life for the better. He could run away for the corruption of society, whether it is a cross-dressing man or young prostitute and her pimp trying to make some extra money. He could also live his life like a game, being rejected by society, but at the same time receiving its sympathy and escaping the phony people of the world. There would be no more secret slobs like Stradlater to put up with, or drunk teachers trying to express their love for their students in the wrong way and at the wrong time. Holden could also fight to protect children from the evil and immorality of society, keeping their minds and hearts pure. He could fight to keep Jane from being corrupted by suave boys only looking for sex, and little children learning what cuss words mean at a young age. No matter what the situation is, Holden Caulfield may have been a teenager who thought he had no place in society, but his heart and mind were always in the right place, whether it be in reality or in his fantasy world. ...read more.