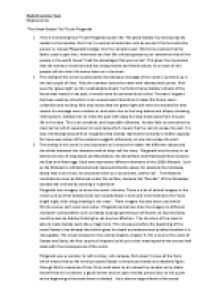 ﻿English Summer Task Shaylee Jones ?The Great Gatsby? By F Scott Fitzgerald 1. I find it interesting how F Scott Fitzgerald opens the ?The great Gatsby? by introducing the reader to the narrator. But it isn?t a normal introduction such as we don?t find out who this person is; instead Fitzgerald indulges into the narrators past. We find out advice that his father used to give him; ?whenever you feel like criticizing anyone just remember that all the people in the world haven?t had the advantages that you?ve had?. This gives the impression that the narrator is tolerant and has strong morals and family values. As a result of this people tell him their life stories later on in the book. 2. The ending of the novel is particularly interesting as message of the novel is summed up in the last couple of lines. Nick the narrator closes the novel with characteristic prose. Nick sees the ?green light? as the ?unattainable dream? he thinks that as Gatsby?s dream of the future was rooted in the past, it would never be achieved due to that. The word ?orgastic? has been used by nick which is an unusual word therefore it makes the future seem unfamiliar and exciting. Nick also knows that the green light will never be reached for that reason his message never reaches a conclusion due to the long dashes and ellipses showing interruptions. ...read more.

Tom is a cruel bully, physically threatening both his wife and his mistress. He is a hypocrite as well; he condemns his wife for her unfaithfulness, but he has no intentions about stopping the affair he himself is having. Daisy's lifelong friend- Jordan Baker is a professional golfer who cheated in order to win her first tournament. Jordan is extremely pessimistic, with a manly, icy character that Nick originally finds compelling. The two become temporarily involved, but Jordan rejects him as she believes he is as corrupt as she is. A down-to-earth, vital, and voluptuous woman, Myrtle is desperate to improve her standard of life. She is in loveless marriage with George Wilson; a man who runs a scruffy garage. However she has been having a long-term affair with Tom Buchanan and is very jealous of his wife. After a fight with her husband, she runs out into the street and is hit and killed by Gatsby's car. ?The Kite Runner? By Khaled Hosseni 1. At the beginning of the novel the main character; Amir, gets right to the heart of the matter in the opening scene in "The Kite Runner" this is interesting as there is no introduction to the story which is unusual. He describes his memory of "crouching behind a crumbling mud wall, peeking into the alley near the frozen creek". He is remembering the scene where the crucial moment of his life took place. ...read more.

Ultimately he does so through courage and self-sacrifice, and he tells his story as a form of penance. Hassan proves himself a loyal friend to Amir repeatedly, defending Amir when he is attacked and always being ready to listen. His defining traits are bravery, selflessness, and intelligence, though his smarts are more instinctual than bookish, largely because he is uneducated. As a poor ethnic Hazara, he is considered an inferior in Afghan society, and he is the victim of r****m throughout the novel as a result. He is Baba?s illegitimate child, though he is not aware of this fact, and he grows up with Ali acting as his father. His r**e is an early catalyst in the story, and even though he is not present in a significant portion of the novel, he plays a major role throughout. Father of Amir and Hassan and a wealthy, well-respected businessman. Baba believes first and foremost in doing what is right and thinking for oneself, and he tries to impart these qualities to Amir. He also never lets anyone?s lack of belief in him stop him from accomplishing his goals. Although he distrusts religious fundamentalism, he follows his own moral code and acts with self-assurance and bravery. When necessary, he is even willing to risk his life for what he believes in. Yet his shame at having a child with a Hazara woman leads him to hide the fact that Hassan is his son. Because he cannot love Hassan openly, he is somewhat distant toward Amir and is often hard on him, though he undoubtedly loves him. ...read more.