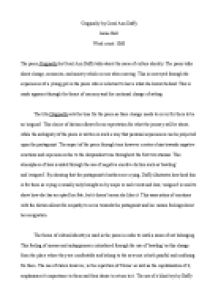 Analysis of the poem &quot;Originally&quot; by Carol Ann Duffy

﻿'Originally' by Carol Ann Duffy Jamie Bell Word count: 1068 The poem Originally by Carol Ann Duffy talks about the issue of culture identity. The poem talks about change, memories, and anxiety which occurs when moving. This is conveyed through the experiences of a young girl in the poem who is reluctant to leave what she knows behind. This is made apparent through the theme of memory and the continual change of setting. The title Originally sets the tone for the poem as there change needs to occur for there to be an 'original'. This choice of diction allows for an expectation for what the journey will be about, while the ambiguity of the poem is written in such a way that personal experiences can be projected upon the protagonist. The aspect of the poem through tone however creates a bias towards negative emotions and experiences due to the despondent tone throughout the first two stanzas. This atmosphere of loss is aided through the use of negative emotive diction such as 'bawling' and 'resigned'. ...read more.

At the time, the girl doesn't want this however, so she is clinging onto a toy to maintain her memories of home. Additionally, a toy is associated with childhood, so the clinging onto it may represent how she doesn't want to grow up and leave her comforts behind. By saying in the second stanza that 'all childhood is emigration', Duffy allows for immediate relation to the protagonists situation. This is due to the journey of growing up to adulthood which is a worldwide experience, as well as referring to physical emigration of moving from one place to another. Improtantly however, the emigration of childhood is all made without the acceptance of the person moving, they cannot stop growing older, and parents make the ultimate decisions. This unease and the inability to understand the need to move is reinforced by the location of her new home where 'no one you know stays.' This introduces the tone of isolation which is reinforced by having the wrong accent, and 'shouting words you don't understand' which immediately marks a person as being ...read more.

The rhyming of the words 'first space' and 'right place' reinforces the doubt she feels about her cultural identity. The continued doubt of the protagonist's cultural identity which occurs in lines 23 and 24, illustrates how she will continue to try and find the answers throughout her life as she will never be truly certain of who she is, creating a sense of not belonging. Although emigration is a hard thing to experience, Duffy illustrates that trying to maintain a cultural identity through such a process may cause problems later. The continued rejection of the new culture illustrates how much of an outsider it makes the protagonist feel later in life, which could have been avoided if it had been readily embraced. The place which she originates from will always have a draw, however, the acceptance of a new culture viewed as a new part of a personal culture, would be much easier to accept than a replacement to the old one. ...read more.

Overall, this is a sound analysis of some key aspects of the poem, demonstrating good understanding. Textual evidence is usually employed to support a point and analysis is offered, using some technical vocabulary. A few points for improvement:

1) A clear plan before writing would ensure that key aspects of the poem were not ignored, as they are here. The writer could have explored the following:
2) The shift in narrative voice from collective first-person, to singular first-person to second person. Why might the poet have done this?
3) The structure of the poem is not fully explored. Why the use of three eight-lined stanzas, ten syllables per line?
4) Syntax was touched on, but also not examined properly. Why the use of caesura and enjambement on certain occasions?
5) Although not always relevant to textual analysis, contextual references can offer insights into the poem. Duffy may have been commenting here on her own experiences of moving from Scotland to England as a young child.