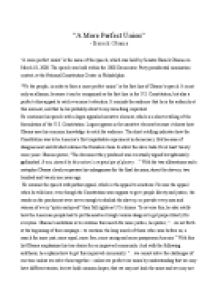 ﻿?A More Perfect Union? - Barack Obama ?A more perfect union? is the name of the speech, which was held by Senator Barack Obama on March 18, 2008. The speech was held within the 2008 Democratic Party presidential nomination contest, at the National Constitution Center in Philadelphia. ?We the people, in order to form a more perfect union? is the first line of Obama?s speech. It is not only an allusion, because it can be recognized as the first line in the U.S. Constitution, but also a perfect ethos appeal to catch everyone?s attention. It reminds the audience that he is the authority at this moment, and that he his probably about to say something important. He continues his speech with a logos appealed narrative element, which is a short retelling of the formulation of the U.S. Constitution. Logos appears in the narrative element because it shows how Obama uses his common knowledge to catch the audience. The short retelling indicates how the Constitution was to be America?s first improbable experiment in democracy. But because of disagreement and divided colonies the founders chose to allow the slave trade for at least twenty more years. ...read more.

And with the following antithesis, he explains how to get this improved community: ??we cannot solve the challenges of our time unless we solve them together ? unless we perfect our union by understanding that we may have different stories, but we hold common hopes; that we may not look the same and we may not have come from the same place, but we all want to move in the same direction ? towards a better future?? The quote, which not only contains antithesis, also describes how Obama especially uses pathos as his form of appeal. The pathos appeal continues in high definition when Obama carries on with his speech by using a narrative element when telling about his own American story. The emotion effect, which pathos embodies, is thrown like a b**b when Obama describes how his grandfather survived a depression to serve in Patton?s Army during Wold War II. Except for the emotion b**b, Obama starts to gain ethos when telling about his genetic makeup. He states, that he is the son of a black man from Kenya and a white woman from Kansas. ...read more.

Later the same year as when ?A More Perfect Union? was held, Obama held a speech at the Democratic Convention in Denver, called ?The American Promise?. The American Promise withholds the fundamental belief in the true American Dream, a dream that can be succeeded by anyone through sacrifice and hard work. Because of this, everyone is able to pursue their own individual dream, but still achieve a well-working community, which can come together as one. Exactly the same community is enlightened in A More Perfect Union. This can especially be seen in the last part of the extracted version, where Obama explains his American story. He concludes that no matter what color or race you belong within, the whole population of America is truly as one person. All in all it is clear that the two speeches convey the same purpose. A society of hope, justice, equality, liberty, freedom and successive goals, this is not only the ideal civilization, but it is also the American Dream - and Promise of Obama himself. It?s a dream and promise, to the American people, which he promotes throughout his two speeches, ?A More Perfect Union? and ?The American Promise?. ...read more.