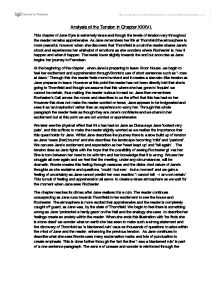 Analysis of the Tension in Chapter XXXVI

Analysis of the Tension in Chapter XXXVI. This chapter of Jane Eyre is extremely tense and though the levels of tension vary throughout the reader remains apprehensive. As Jane remembers her life at Thornfield the atmosphere is more peaceful, however when she discovers that Thornfield is a ruin the reader shares Jane's shock and experiences her whirlwind of emotions as she wonders where Rochester is, how it happen and when it happen. The levels lower slightly towards the end but soon rise as Jane begins her journey to Ferndean. At the beginning of the chapter, when Jane is preparing to leave Moor House, we begin to feel her excitement and apprehension through Bronte's use of short sentences such as 'I rose at dawn.' Through this the reader feels more involved and it creates a staccato-like tension as Jane prepares to leave. However at this point the reader has not been directly told that she is going to Thornfield and though we assume that this where she has gone to 'inquire' we cannot be certain, thus making the reader curious to read on. Jane then remembers Rochester's Call across the moors and describes to us the effect that this has had on her. ...read more.

When she ends this illustration with 'he finds she is stone dead' we wonder what on earth she has seen to make such a strong statement and the discovery of Thornfield as 'a blackened ruin' causes thousands of questions to arise within the mind of Jane and the reader, enhancing the previous tension. As Jane continues to describe what she sees Bronte uses many exclamation marks and lots of punctuation to create emphasis. This is done further through the fact the line 'I saw a blackened ruin' is part of a one sentence paragraph. The sense of unease and wonder is reinforced through the supernatural reference to Jane's having 'seen it in a dream' and the idea that her dreams predict reality. After Jane is over the initial shock of the sight she begins to ask many questions which the reader reciprocates, thus creating a great deal of suspense and agitation. Jane asks 'Had life been wrecked' and the reader sincerely hopes not as they begin to realise the effect that this would have on Jane. It is clear throughout the extract that Jane's love for Rochester has not disintegrated though separation or the devastation caused through the discovery of Bertha Mason. ...read more.

However this is met with a slight anti-climax as he is only physically 'helpless' as opposed to being 'mad'. Madness throughout the book is represented by Bronte as being the worst illness a person can have and that the mind is our most important asset. It is the similarity of Jane's and Rochester's mind that causes their love and without his mind Jane's love for Rochester would be tested in a must cruel way. As the reader breathes a sigh of relief, that Jane has not received any awful news such as his death, we learn that her anxiety to see him and help him in his helplessness is causing her to go 'instantly' to Ferndean 'before dark this day'. The chapter ends extremely tensely as the reader wonders what Jane will do, what sort of state Rochester will be in and whether this will have a happy ending. This chapter remains tense throughout due to the uncertainty of Jane's future and what has happened to Rochester. However it reaches its climax when Thornfield is discovered to be a ruin. This tension is emphasised by the long 'illustration' that arouses fear and curiosity before Jane finally reveals what has happened. The reader then experiences a rollercoaster of emotions, as fear is created and then dispelled, but the chapter ends with another climax when we wonder what events at Ferndean will bring. ...read more.