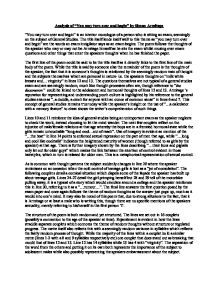 Analysis of &quot;You may turn over and begin&quot; by Simon Armitage.

Analysis of "You may turn over and begin" by Simon Armitage "You may turn over and begin" is an interior monologue of a person who is sitting an exam, seemingly on the subject of General Studies. The title itself lends itself well to this theme as "you may turn over and begin" are the words an exam invigilator says as an exam begins. The poem follows the thoughts of the speaker who may or may not be Armitage himself as he sits the exam whilst musing over exam questions and other things that enter the speakers thoughts when he has finished the paper. The first line of the poem could be said to be the title itself as it directly links to the first line of the main body of the poem. While the title is said by someone else the remainder of the poem is the thoughts of the speaker, the fact that it is someone's thoughts is reinforced by the seemingly random train of thought and the subjects themselves which are personal in nature- i.e. the speakers thoughts on "milk white b*****s and... virginity" in lines 12 and 13. ...read more.

Lines 24-27 detail the girl primping herself but 28 and 29 tell of the motorbike pulling away, it is a typical of a story which would circulate around a college and the speaker reinforces this in line 30, referring to it as a "...rumour...". The final line answers the first question posed by the exam paper and once again follows the theme of random thoughts as the answer just pops up, much as it would into one's mind. It may also be noted of this poem that, due to strong allusions to the fact, that it is Armitage or at least a male who is writing this, though there are no specific mentions of the speakers sexuality, merely referring to his/herself in the first person 'I'. The structure of the poem is both random and yet structured. The lines are set out in 16 couplets (possibly a connection to the age of the speaker at time). Enjambment is evident in how the lines straddle separate couplets which connotes the theme of random thoughts without structure or regulated progress. The metre itself also reflects this with a seemingly random variance in syllables which reflects the fairly random process of thought. ...read more.

Particular attention is made to the appearance of the girl in lines 24 to 27 with pre modification evident, "...her tight jeans" which continues the theme of a hormonal teenager l*****g after girls. The poem itself is a mixture of teen angst and comedy. We can assume that Armitage writes this poem from personal experience as most men can identify with the thoughts of the speaker, while everyone who has taken the general studies exams will identify with the speakers opinion on it as a bit of a waste of time. As a male I can sympathise with the speaker while a female reading this would be, in my opinion, more likely to focus on the comedy aspect of the poem rather than the hormonal maelstrom that is shown in the first half of the poem. While the structure, rhythm and lexis all support the context of the poem it may be said that while the theme of random thought is well presented there are sections which detract from the success of the attempt to achieve this theme. This mainly manifests itself in the ordered nature of some of the narration and use of simile ("long and cool like cocktails") which is not a realistic thought. Despite this the devices used combine to good effect in this perception which is very easy to identify with. ...read more.