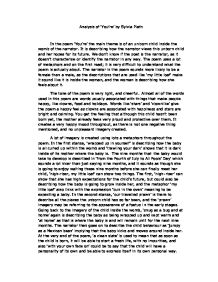 Analysis of 'You're' by Sylivia Plath

Analysis of 'You're' by Sylvia Plath In the poem 'You're' the main theme is of an unborn child inside the womb of the narrator. It is describing how the narrator views this unborn child and her hopes for its future. We don't know if the poet is the narrator, as it doesn't characterise or identify the narrator in any way. The poem uses a lot of metaphors and on the first read; it is very difficult to understand what the poem is actually about. The narrator in the poem sounds more likely to be a female than a male, as the descriptions that are used like 'my little loaf' make it sound like it is inside the woman, and the woman is describing how she feels about it. ...read more.

The nine months that the baby would take to develop is described in 'from the Fourth of July to All Fools' Day' which sounds a lot nicer than just saying nine months, and it sounds as though she is going to enjoy waiting these nine months before she can finally meet her child, 'high-riser, my little loaf' can show two things. The first, 'high-riser' can show that she has high expectations for the child's future, but could also be describing how the baby is going to grow inside her, and the metaphor 'my little loaf' also links with the expression 'bun in the oven' meaning to be expecting a baby. In the second stanza, 'our travelled prawn' is there to describe all the places the unborn child has so far been, and the 'prawn' imagery may be referring to the appearance of a foetus in the early stages. ...read more.

to say that the child will have a personality of its own and be able to express itself in its own personal way. The poem doesn't really have any particular rhythm or rhyming scheme to it, but it still reads a very happy, easy way. There is alliteration used on 'happiest on your hands' which makes the baby sound like it is having a nice time, even though in reality its squashed into a confined space. The poem is very short with only eighteen lines in total, with both stanzas having 9 lines in each, and most of the lines have seven syllables in. The comma after the first word of the poem adds effect, and the consistent use of the commas throughout break the poem up as the narrator descries each different thing she likes. ...read more.