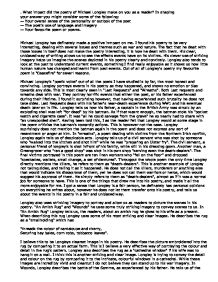 Analysis on Michael Longley's Poetry - Its effect on me

. What impact did the poetry of Michael Longley make on you as a reader? In shaping your answer you might consider some of the following: - Your overall sense of the personality or outlook of the poet - The poet's use of language and imagery - Your favourite poem or poems. Michael Longley has definately made a positive inmpact on me. I found his poetry to be very interesting, dealing with several issues and themes such as war and nature. The fact that he dealt with those issues in itself does not make the poetry interesting, it is how he dealt with them. His clear, unbiased way of writing allows us to see the effects events have on its victims. His clever use of striking imagery helps us imagine the scenes depicted in his poetry clearly and concicely. Longley also tends to look at the past to understand current events, something I find really enjoyable as it shows us how little human nature has changed and learnt from past events. Out of all of Longley's poetry my favourite poem is "Ceasefire" for severl reasons. Michael Longley's "poetic voice" out of all the poets I have studied is by far, the most honest and convincing. Longley portrays events in his poetry as they happened, and shows no emotion or bias towards any side. ...read more.

He describes the rug as a "smallholding" which has "threads the colour of cantaloupe and cherry, Securing hay bales, corn cobs, tobbacco leaves". I believe this to be Longleys clearest image in his poetry. He describes the picture embroidered into the rug by comparing it to an actual farm. This is I believe a very effective way of portraying the colour and detail in the rug's pattern. Longley also describes the rug as a "cathedral window" if his wife was to hang it on a wall. I think this is another striking and clear image. Longley is trying to convey the detail and colour on the rug by comparing it to the intricate, colourful windows in a cathedral. While these images are incredibly vivid and clearcut I do not believe they can stand up to his war imagery. In Wounds, Longley describes the battle of the Somme, as experienced by his father. He tells us of the Ulster Division "going over the top with 'f**k the Pope!', 'No Surrender!' a boy about to die". This image is one which I wont forget any time soon. Millions of images let us picture the soldiers going over the top. Few however can convey the fear and anxiety felt by the soldiers, who also happen to be young men if not boys. ...read more.

Once he does that he can bring himself to ask Achilles for his sons body back. This applies to out lives today too. When one has a fight or argument with another person, the only way to reconcile and move on is to forget what harm the other side has done and forgive them. This also applies to the Northern Irish conflict. Longley recongises the fact that both sides have made sacrifices but also realises that the only way for them to reconcile and move on is to put the sacrifices behind them and forgive their enemies. In ceasefire, Longley provides us with the situation faced by many Northern Irish families during the times of the fighting, when bodies of their loved ones were lost in the fighting and never returned to them to be buried and mourned. Many Northern Irish families did not have the luxury of Priam to go and kiss 'the killer of my son'. Longley suggests that such compassion as is seen by both Prian and Achilles is needed in Northern Ireland. Overall, I think that Longley is a very talented poet who has extraordiary abilities. He is a fair, observing person with an innate ability with words to create striking imagery that can convey images clearly and preciscely. I also find his ability to look at the past and link it to events in the present, mainly the Northern Irish conflict. He does this to suggest ways to end and resolve them. ...read more.