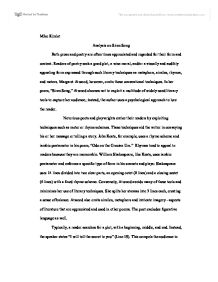 Mike Kimlat Analysis on Siren Song Both prose and poetry are often times appreciated and regarded for their form and content. Readers of poetry seek a good plot, a wise moral, and/or a visually and audibly appealing form expressed through such literary techniques as metaphors, similes, rhymes, and meters. Margaret Atwood, however, omits these conventional techniques. In her poem, "Siren Song," Atwood chooses not to exploit a multitude of widely-used literary tools to capture her audience; instead, the author uses a psychological approach to lure the reader. Notorious poets and playwrights entice their readers by exploiting techniques such as meter or rhyme schemes. These techniques aid the writer in conveying his or her message or telling a story. John Keats, for example, uses a rhyme scheme and iambic pentameter in his poem, "Ode on the Grecian Urn." Rhymes tend to appeal to readers because they are memorable. William Shakespeare, like Keats, uses iambic pentameter and enforces a specific type of form in his sonnets and plays: Shakespeare uses 14 lines divided into two clear parts, an opening octet (8 lines) ...read more.

Atwood's trickery forces the reader to find out what comes next. "Shall I tell you the secret/ and if I do, will you get me/ out of this bird suit?" (Lines 10-12). Her cunning words attempt to woo the reader into freeing her "out of this bird suit." Atwood's omission of a plot is purposeful; she demonstrates that a 'story' of no substance can be as appealing to the reader as a complicated plot with a definite climax. A plot serves the purpose of providing a story to concern or interest the reader. Atwood begins her poem by saying, "This is the one song everyone/ would like to learn: the song/ that is irresistible:." Instead of establishing a plot, or commencing a story, Atwood quickly grasps the reader's attention by making him or her want to learn the song. She then describes the song and stresses its negativity. "because anyone who has heard it/ is dead, and the others can't remember" (Lines 8-9). ...read more.

The reader may easily conclude that the speaker is in fact a siren; one who wants to convince the reader into hearing the song and falling in to the siren's trap. The siren wants the reader to become its victim and wants the reader to hear the song. The only way the song can be heard is through the siren because everyone else who has heard it is either dead or doesn't remember it. The sirens in Homer's The Odyssey approach Odysseus and his men in a similar fashion as the speaker of "Siren Song" approaches the reader. The sirens woo the men and take control of their psyche which is parallel to the way the speaker of "Siren Song" (also a siren) addresses her reader. Both poems exemplify the power of women over men. They seek the same purpose: to take control. Clearly, Margaret Atwood expresses her own unique style in this poem. She creates a poem that can stand on its own, without many literary techniques and without any plot or story. She presents her poem as "irresistible" psychologically rather than utilizing traditional literary techniques to lure the reader. ...read more.