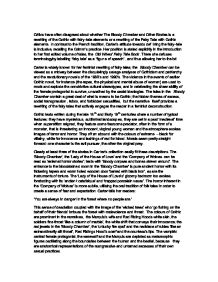 Critics have often disagreed about whether The b****y Chmaber and Other Stories is a rewriting of the Gothic with fairy-tale elements or a rewriting of the Fairy Tale with Gothic elements. In contrast to the French tradition, Carter's attitude towards defining the fairy-tale is inclusive, recalling the Grimm's practice. Her position is stated explicitly in the introduction to her first edited volume of tales, the Old Wives' Fairy Tale Book. There she defuses terminologyby labelling 'fairy tale' as a 'figure of speech' , and thus allowing her to the bri Carter is widely known for her feminist rewriting of fairy tales; the b****y Chamber can be viewed as a midway between the disquietingly savage analyses of Gothicism and patriarchy and the revolutionary novels of the 1980's and 1990's. The violence in the events of earlier Gothic novel, for instance (the rapes, the physical and mental abuse of women) are used to mock and explode the constrictive cultural stereotypes, and in celebrating the sheer ability of the female protagonist to survive, unscathed by the s****t ideologies. The tales in the b****y Chamber contain a great deal of what is means to be Gothic; the hidden themes of excess, social transgression , taboo, and forbidden sexualities, but the narrative itself provides a rewriting of the fairy tales that actively engages the reader in a feminist deconstruction. ...read more.

In the 'Lady of the House of Love' we are told that the lady's 'ancestors sometimes peer out of the windows of her eyes'. In the Company of Wolves the folk myths of the past haunt the protagonists steps as she steals through the haunted forest. The 'b****y Chamber' is populated by images of modernity, 'trains' and 'bicycles' in defiance of Gothic temporal conventions. Yet, Carter is most famous for her challenges to the way female characters had previously been represented in pre-modern literature. As well as rewriting fairy tales, Carter also edited two collections of them in the early 1990's, which included tales collected by Charles Perrault in the 1690's. Perrault rewrote and sanatised the older, darker oral tales in order to use them to make moral points about the conduct of middle class children. In the b****y Chamber Carter attempts to reclaim these tales from their seventeenth century recomposition and draw out their more covert gender implications. Two of the tales also rework elements familiar from the Female Gothic concerning absent mothers, most notably in the 'b****y Chamber' when it is the mother's presence that promises salvation. The tale concludes with the arrival of the young bride's mother, summoned by 'maternal telepathy' (reworking Radcliffe's heroines unconscious pursuits of their mothers) ...read more.

The b****y Chamber may be read as an exploration of the possibilities of the kind of synthesis de Sade himself 'could never find because he wasn't looking for it'.1 Predator and prey, master and slave, are the only two categories - or roles; one person may play both, although only alternately. Above all, s*x between unequals cannot be mutually pleasurable because pleasure belongs to the eater and not the eaten. What Carter seems to me doing - among other things is looking for ways in which the tiger and lamb parts of the psyche, can reach some sort of accomadation. The nature of men is not fixed by Carter as inevitably predatory, with females as their natural prey. Lambhood and tigerishness can be found in either gender , and in the same individual at different times. Indeed the chamber in the 'b****y Chamber' can be read as metaphysical representation of the Marquis's tigerishness which awakes in the marriage bed and the closing scene but is kept under lock and key in the dark recesses of his mind for the remainder of the story. It is this repressed human emotion that is a key point of exploration in the Gothic and fairy tale forms. 1 The Sadeian Women and the b****y Chamber, Gamble ?? ?? ?? ?? ...read more.