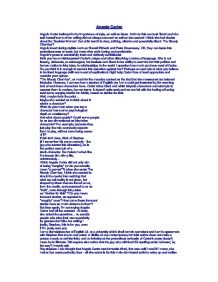 Angela Carter Angela Carter believed in the importance of style, as well as ideas. At times this can look 'floral' and she said herself some of her writing did not always succeed as well as she wanted- I think she had doubts about the 'Sadeian Woman'. But at its best it is clear, striking, allusive and powerfully direct: The b****y Chamber? Angela loved daring stylists such as Ronald Firbank and Peter Greenaway. OK, they can lapse into pretentiousness at worst, but most other art is boring and predictable. Angela's prose is wonderfully fresh and defiantly exhibitionist think you have misinterpreted Carter's unique and often disturbing mastery of language. She is not flowery, elaborate, or extravagant, but fearless and direct in her ability to examine feminist politics and human malice in fairy tales, in relationships, in the world. I question how much you have read of Carter. Do you think it is enough to warrant this assertion against her? Perhaps an example of what you believe to be floral language (with some sort of explication) might help Carter fans at least appreciate and consider your opinon. "The b****y Chamber", as much for the macabre content as the fact that she massacred our beloved fairytales. However, I can see how a student of English (as I am) could get frustrated by the seeming lack of soul these characters have. ...read more.

I mean, she makes her cases perfectly clear - all she wants is for this male-dominated world to wake up and realise women do have power, are able to use it and are not all pink and flowery. Her writing isn't flowery and neither are her morals! Hey, Stephen, I'm also a student of English (at AS level) and I was warned by friends in years above me that Angela Carter was boring flowery weird drivel. And I believed it, even after the first time I'd read the b****y chamber. But I suggest that if you still think this, you should be having serious thoughts about getting extra help from your English teacher. Carter's style of writing is called 'opaque' writing - it means the way in which she conveys her meaning is very important, as well as the actual meaning. Her use of words not found in most people's vocabulary are not to challenge or demean her readers but to allow her to say *exactly* what she means (for example, Prothalamion). She uses the language she does not because she is over-decorative or hiding a gap in her narrative ability, but because it is important to her how her message is conveyed. I think, anyway... Like everyone else in the West, I grew up with them: the tales of curious virgins, mysterious heroes, vampires, witches and werewolves. ...read more.

As soon as this patriarch persuades his wives to join in the fun he punishes them with death. In the world in which we grow up, women are currency: 'My father lost me to The Beast at cards' begins The Tiger's Bride. When she rides out with the beasts, she notes: 'The six of us - mounts and riders, both - could boast amongst us not one soul... since all the best religions in the world state categorically that not beasts nor women were equipped with the flimsy, insubstantial things'. Small wonder then that she chooses to become a beast herself, sending back to her father the obedient clockwork maid 'to perform the part of my father's daughter'. In this collection, questions of women's sexuality come up time and time again. At times Carter's work seems to come close to p*********y. Published in 1979, this book looks more closely at women's s****l liberation and o****m than most writers do today. So what can a woman's life and her sexuality be? With Carter it is not always clear. Take the case of her Little Red Riding Hood, pubescent and as fearless as the handsome werewolf she longs to kiss. This tantalizing tale ends at its climax, and I still don't know what the moral of it is. But perhaps the wish to find a 'moral' is suspect. Perhaps, in the relatively liberated late twentieth century we should be reading the old tales quite differently. Angela Carter gives us a chance to do so. ...read more.