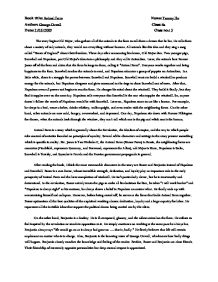 Book title: Animal Farm Name: Yammy Ho Author: George Orwell Class: 6s Date: 2/05/2009 Class no.: 5 The story begins Old Major, who gathers all of the animals in the farm to tell them a dream that he has. He tells them about a society of only animals, they would run everything without humans. All animals like this idea and they sing a song called "Beasts of England" about their freedom. Three days after announcing his dream, Old Major dies. Two younger pigs, Snowball and Napoleon, put Old Major's ideas into a philosophy and they call it Animalism. Later, the animals beat Farmer Jones off of the farm and claim that the farm belongs to them, calling it "Animal Farm". ...read more.

On the other hand, other animals are now cold, hungry, overworked, and depressed. One day, Napoleon sits down with Farmer Pilkington for dinner, when the animals look through the window, they can't tell which one is the pig and which one is the human. Animal Farm is a story which is generally about the Revolution, the idealism of utopias, and the way in which people take control of societies founded on principles of equality. Several of the characters and settings in the story present something which is specific in reality. Mr. Jones is Tsar Nicholas II, the Animal Farm (Manor Farm) is Russia, the neighboring farms are countries (Pinchfield, represents Germany, and Foxwood, represents the Allies), old Major is Marx, Napoleon is Stalin, Snowball is Trotsky, and Squealer is Pravda and the Russian government propaganda in general. ...read more.

Boxer epitomizes all the best qualities of the exploited working classes: dedication, loyalty and a huge capacity for labor. He represents all the invisible labor that support the political drama being carried out by the elites. On the other hand, Benjamin is a donkey. He is ill-tempered, gloomy, and the oldest animal on the farm. He refuses to feel inspired by the revolution or stands in opposition to it. He simply continues on working at the same pace he always has. Benjamin always says "life would go on as it always had gone on - that is, badly." He firmly believes that life will remain unpleasant no matter who is in charge. Also, Benjamin is the knowing voice of George Orwell, who knows how badly things will happen. Benjamin closely matches the knowledge and feeling of the reader. Besides, Boxer and Benjamin are close friends. Their friendship of extremely opposite personalities but deep mutual respect is appreciated. ...read more.