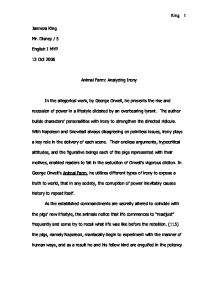 Janneza King Mr. Disney / 5 English I MYP 13 Oct 2006 Animal Farm: Analyzing Irony In the allegorical work, by George Orwell, he presents the rise and recession of power in a lifestyle dictated by an overbearing tyrant. The author builds characters' personalities with irony to strengthen the directed ridicule. With Napoleon and Snowball always disagreeing on pointless issues, irony plays a key role in the delivery of each scene. Their endless arguments, hypocritical attitudes, and the figurative beings each of the pigs represented with their motives, enabled readers to fall in the seduction of Orwell's vigorous diction. In George Orwell's Animal Farm, he utilizes different types of irony to expose a truth to world, that in any society, the corruption of power inevitably causes history to repeat itself. As the established commandments are secretly altered to coincide with the pigs' new lifestyle, the animals notice that life commences to "readjust" frequently and some try to recall what life was like before the rebellion. ...read more.

Once the rebellion and transformation of power had occurred, the animals strive to make the farm the sanctuary that was once foretold in a vision, but when Snowball is exiled from Animal Farm, there is no longer a figure of authority to repress Napoleon's tyrannical ideas. The once voided plans of constructing the windmill were hypocritically set into action, by Napoleon, after Snowball was banished. Succeeding the erection of the windmill, Napoleon personally congratulated the animals on their achievement and announced that the windmill be named Napoleon Mill. (104) Orwell manipulates verbal irony to announce through Napoleon, to the reader, that all the laborious days and sleepless nights that the working class of animals endured, were to be completely ignored, with the attention and glory reserved for the pigs. As the animals adjusted to living and working for themselves, Squealer acted as a figurative emotional commander for the animals that believed they were living in worsened conditions than from when they were cared for by Mr. ...read more.

Napoleon has the animals continue working even though their rations "readjust" frequently. Boxer persists to work until his condition becomes grave and his weakness condemns him to death. Life goes on as it always has "badly" (8) and their economy eventually dwindles down to nothing so that they live in conditions far worse than with the once feared Mr. Jones. Orwell's use of irony invigorates his satire in this allegorical novel, Animal Farm, by revealing the hypocritical personalities of characters both figurative and literal. With this exploitation, it made the message robust and proclaimed, also helping direct his intended ridicule towards societies that strive for absolute equality. One of Orwell's reasons for writing this novel was to clear the fog covered glasses for those who believe that a Utopia in any society can be completely reached. The straight forward message in this novel still applies to our corrupt world today. Through the extortion of power on Animal Farm, it procured history to repeat itself and restore Animal Farm to its almost original state. Word Count: 1,000 ?? ?? ?? ?? 1 King ...read more.