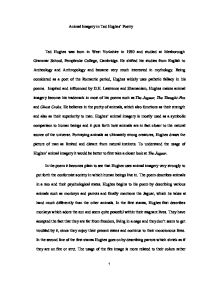 Animal Imagery in Ted Hughes Poetry - The Jaguar, The Thought-Fox and Ghost Crabs.

Animal Imagery in Ted Hughes' Poetry Ted Hughes was born in West Yorkshire in 1930 and studied at Mexborough Grammar School, Pempbroke College, Cambridge. He shifted his studies from English to Archeology and Anthropology and became very much interested in mythology. Being considered as a poet of the Romantic period, Hughes widely uses pathetic fallacy in his poems. Inspired and influenced by D.H. Lawrence and Shamanism, Hughes makes animal imagery become his trademark in most of his poems such as The Jaguar, The Thought-Fox and Ghost Crabs. He believes in the purity of animals, which also functions as their strength and also as their superiority to man. Hughes' animal imagery is mostly used as a symbolic comparison to human beings and it puts forth how animals are in fact closer to the natural source of the universe. Portraying animals as ultimately strong creatures, Hughes draws the picture of man as limited and distant from natural instincts. To understand the usage of Hughes' animal imagery it would be better to first take a closer look at The Jaguar. In the poem it becomes plain to see that Hughes uses animal imagery very strongly to put forth the conformist society in which human beings live in. The poem describes animals in a zoo and their psychological states. Hughes begins to his poem by describing various animals such as monkeys and parrots and finally mentions the Jaguar, which he takes at hand much differently than the other animals. In the first stanza, Hughes first describes monkeys which adore the sun and seem quite peaceful within their stagnant lives. They have accepted the fact that they are far from freedom, living in a cage and they don't seem to get troubled by it, since they enjoy their present states and continue to their monotonous lives. In the second line of the first stanza Hughes goes on by describing parrots which shriek as if they are on fire or strut. ...read more.

The description of the eyes makes the reader visualize them and try to see the meaning in them. Although it is an animal, the eyes of the fox are described as deep and as meaningfull. The last line of this stanza marks that the fox is only concerned about its own business and that it doesn't have any after thoughts. This state of the fox is perfectionalized since it is brilliantly and concentratelly only concerned about itself and its own business. The last stanza changes the appearance of the fox from a physical being to a rather spiritual being, since it jumps into the mind of the poet with a fast movement. The night is still starless and the clock continues to tick, so everything seems like it was when the poet first started to write his poem, but now the page is printed. The scene which the poet creates with the images he uses is like a fox first roaming through the forest in the night, then suddenly looking directly in the eyes of the poet, and entering his mind through his eyes. Thus, at the end of the poem, the poet has created something out of nothingness and printed it on the paper through the appearance of the fox. The fox has become the poem and the poem has become the fox. Most probably at the very beginning of the poem the poet was staring out of the window for inspiration with a blank paper in front of him. At the very end of the poem, his page is printed and the thought of the fox is now in his head. So it might be possible to say that inspiration doesn't come from the outside but from within, through the instincts. As in most of Hughes animal poems, the fox is once more used as a symbol of the deepest instincts. The plainness and simplicity of the animal, and it only thinking of the present time being, minding only its own business, creates a contrast with the general human state, which is far from achieving these qualities. ...read more.

Animals are far from limits and social values, thus they are capable of living their own self true nature and that specialty makes them powerful and wise. Man, on the other hand, is far from living its own true nature due to the limitations and social values which block the instincts. Thus, man is not free, confused, ignorance and lost. Comparing Hughes's animal imagery to D. H. Lawrence's animal imagery, it would be possible to say that Hughes was deeply inspired by D. H. Lawrence and that both their animal imageries are based on the same theme of man's ignorance and animals' wisdom. Especially in one of D. H. Lawrence's most famous poems The Snake, the poet adopts a similar attitude to Hughes'. Roughly speaking, in the poem The Snake, the poet comes across a snake and harms him and later feels regret for having done this. He puts the blame on his education for being a human being and describes the snake as a king at the very end of the poem. Here, the theme of animals' superiority to human beings is once more seen similar to Hughes poetry. The similarity of the theme in animal poems links these two poets together. One other similarity that these two poets use pathetic fallacy which is the treatment of inanimate objects or animals as if they had human feelings, thought, or sensations. Both of the poets use their empathicall power to reveal the feelings of their animals through this technique. However there are also some differences which can be mentioned about these two poets. While Hughes draws the picture of his animals in a spiritual and a supernatural manner, D.H. Lawrence's animals appear in a more natural form. One other difference can be regarded as the destructive and aggressive appearance of Hughes animals, while D. H. Lawrence chooses to use a mild and soft appearance for his animals. ...read more.