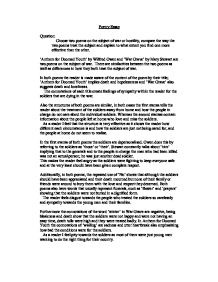 Poetry Essay Question: Choose two poems on the subject of war or hostility, compare the way the two poems treat the subject and explain to what extent you find one more effective than the other. 'Anthem for Doomed Youth' by Wilfred Owen and 'War Grave' by Mary Stewart are two poems on the subject of war. There are similarities between the two poems as well as differences in how they both treat the subject of war. In both poems the reader is made aware of the content of the poem by their title; 'Anthem for Doomed Youth' implies death and hopelessness and 'War Grave' also suggests death and loneliness. The connotations of each title create feelings of sympathy within the reader for the soldiers that are dying in the war. Also the structures of both poems are similar, in both cases the first stanza tells the reader about the treatment of the soldiers away from home and how the people in charge do not care about the individual soldiers. ...read more.

In Anthem for Doomed Youth the connotations of 'wailing' are sadness and utter heartbreak also emphasizing how bad the conditions were for the soldiers. As a reader I feel pity towards the soldiers as most of them were just young men wanting to do the right thing for their country. The idea of the soldiers being mistreated is emphasized in the last line of the first stanza of War Grave. The word choice of 'threw' tells the reader that the soldier was not considered important. The reader feels angry that the people who are fighting to save the country are not been given the respect they deserve. In the second stanza of both poems it becomes evident that the soldiers do have people at home who care about them. This is clear from 'Their flowers the tenderness of patient minds' from Anthem for Doomed Youth talking about the girls at home and 'Through the long waiting night' from War Grave showing that people are waiting for the soldiers to return. ...read more.

By capitalising 'They' it shows that they were considered more important than the ordinary soldiers. In Anthem for Doomed Youth, Owen makes a much bigger point about the age of the soldiers, in the title and in the second stanza with 'boys 'and then with 'girls'. He also makes an issue of the guns being louder and worth more than the soldiers. This is shown by the personification on the guns in the first stanza. - 'Only the monstrous anger of the guns.' - The final contrast between the poems is that Anthem for Doomed Youth was written from personal experience by Owen who was a soldier that fought and died in the war and War Grave is not. 'Anthem for Doomed Youth' by Wilfred Owen and 'War Grave' by Mary Stewart are two poems on the subject of war. There are similarities and differences between the two poems. Personally I find Anthem for Doomed Youth more effective as it was written from personal experience and makes more of the issue that the guns were considered more important than the individual soldiers, it also highlights the fact that most of the soldiers were young. ...read more.