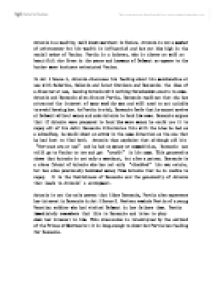 Antonio and Portia comparison - Scene 1 and 2

Antonio is a wealthy, well known merchant in Venice. Antonio is not a member of aristocracy but his wealth is influential and has put him high in the social order of Venice. Portia is a heiress, who is clever as well as beautiful; she lives in the peace and harmony of Belmont as oppose to the busier more business orientated Venice. In Act 1 Scene 1, Antonio discusses his feeling about his merchandise at sea with Salarino, Salanio and later Gratiano and Bassanio; the idea of a disaster at sea, leaving Antonio with nothing foreshadows events to come. Antonio and Bassanio also discuss Portia, Bassanio realises that she has attracted the interest of many wealthy men and will need to act quickly to avoid loosing her. ...read more.

It is the foolishness of Bassanio and the generosity of Antonio that leads to Antonio's entrapment. Antonio is not the only person that likes Bassanio, Portia also expresses her interest in Bassanio in Act 1 Scene 2. Nerissa reminds Portia of a young Venetian soldier who had visited Belmont in her fathers time. Portia immediately remembers that this is Bassanio and tries to play down her interest in him. This discussion is interrupted by the arrival of the Prince of Morroco but it is long enough to show that Portia has feeling for Bassanio. Act 1 Scene 2 takes place in Belmont, Portia is seen to be distressed by not being able to choose her own husband although this was usual for ladies at this time. Portia discusses her situation with Nerissa, Nerissa seems to be Portia's confidante as well as her servant. ...read more.

Antonio does not demonstrate his intelligence in the first two scenes but his position in society could be a measure of this. For Antonio to acquire the money the money that he has from trading, he must have known or learnt some skills along the way. To conclude, Antonia and Portia are both affluent people although they have acquired their money in different ways, and live in different cities. They are also both powerful and intelligent and this attracts people; Antonio's power is derived from the knowledge and wealth he has gained from trading. Portia on the other hand is beautiful and although her wealth is inherited she is still intelligent. "Antonio exists in the brash, masculine world of Venice; Portia dwells in Belmont - a refined, feminine sphere. Despite this we note a certain connection between these two characters." In the light of this statement examine how shakespeare presents these two characters in the opening two scenes. 1 ...read more.