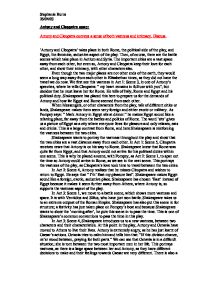 Antony and Cleopatra conveys a sense of both vastness and intimacy. Discuss.

Antony and Cleopatra essay: Antony and Cleopatra conveys a sense of both vastness and intimacy. Discuss. 'Antony and Cleopatra' takes place in both Rome, the political side of the play, and Egypt, the feminine, seductive aspect of the play. Then, of course, there are the battle scenes which take place in Actium and Syria. The important cities are a vast space away from each other, but even so, Antony and Cleopatra keep their love for each other, and show their intimacy, with other characters also. Even though the two major places are not other ends of the earth, they would seem a long way away from each other in Elizabethan times, as they did not have the travel we do now. We first see this vastness in Act 1: Scene 3, in one of Antony's speeches, where he tells Cleopatra: " my heart remains in full use with you", but decides that he must leave her for Rome. He tells of Italy, Rome and Egypt and his political duty. Shakespeare has placed this here to prepare us for the demands of Antony and how far Egypt and Rome seemed from each other. When Messengers, or other characters from the play, talk of different cities or lands, Shakespeare makes them seem very foreign and either exotic or military. ...read more.

It may be taken that Enobarbus is in love with Cleopatra, but every man adored her and admired her. We have seen that there is true vastness in 'Antony and Cleopatra' from the cities that seemed so far apart, to the characteristics of different characters, but there is also clearly intimacy in this play that can easily be seen between characters. The first stage of intimacy we see is straightaway in Act 1: Scene 1. Conventionally, Shakespeare starts the scene with lesser characters, and then the more important characters enter: Antony and Cleopatra. We see, as Philo has told us, that Antony is flirtatious and has abandoned his political duties for his love. We see this when they enter the play when Cleopatra tells Antony: " If it be love indeed, tell me how much." Shakespeare has put this scene here to show the audience of the intimacy between the two most important characters. It prepares us for later on, when we see their true love. Shakespeare uses magical language, 'new heaven, new earth', to describe the love between these two characters. Even though there is obvious intimacy between obvious characters: lovers, we also see this action between female characters. Throughout the play we notice that Cleopatra is very close to her handmaid's Charmian and Iras. ...read more.

Antony enters the scene and Cleopatra is very distraught. Antony says: " I am dying, Egypt, dying." By calling her Egypt, Shakespeare is showing the intimacy between the two characters and it is also romantic. She also calls him "lord", showing her respect for him. Shakespeare has used this language in this scene to convey the intimacy and so we feel sympathy towards the pair when Antony dies. As we said before, Cleopatra is very close to her maids and treats them like sisters or very good friends, not like servants. In her final scene, Act 5: Scene 2, we clearly see how close she was to Charmian and Iras, and how she cherished their friendship. Before she dies she says to them: " Come, then and take the last warmth of my lips." She wishes them goodbye she dies, and we can see how intimate and close the three women were. As we can see both vastness and intimacy feature greatly in this play. From feminine, seductive Egypt, to masculine, military Rome, the vastness is clearly shown, but not only in cities, but also in the characteristics of people in the play. From vastness we move to intimacy, which can be seen in many of the characters, mainly Antony and Cleopatra, but also in siblings and servants. Shakespeare successfully merges these two very different aspects to create an enchanting play. Stephanie Burns 26/04/03 ...read more.