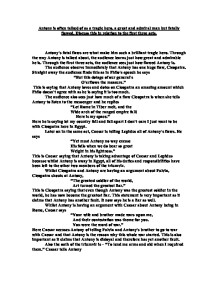 Antony is often talked of as a tragic hero, a great and admiral man but fatally flawed - Discuss this in relation to the first three acts.

Antony is often talked of as a tragic hero, a great and admiral man but fatally flawed. Discuss this in relation to the first three acts. Antony's fatal flaws are what make him such a brilliant tragic hero. Through the way Antony is talked about, the audience learns just how great and admirable he is. Through the first three acts, the audience sees just how flawed Antony is. The audience observe immediately that Antony has one huge flaw, Cleopatra. Straight away the audience finds this as in Philo's speech he says "But this dotage of our general's O'erflows the measure." This is saying that Antony loves and dotes on Cleopatra an amazing amount which Philo doesn't agree with as he is saying it is too much. The audience also sees just how much of a flaw Cleopatra is when she tells Antony to listen to the messenger and he replies "Let Rome in Tiber melt, and the Wide arch of the ranged empire fall! Here is my space." Here he is saying let my country fail and fall apart I don't care I just want to be with Cleopatra here in Egypt. ...read more.

Whilst the debate about sea or land is still continuing, a solider enters and says to Antony "O noble emperor, do not fight by sea." The soldier does not think Antony should fight at sea as he fears the same as Antony that they will lose. Antony gets quite defensive and embarrassed by these doubts a solider has about supposedly the greatest soldier in the world and he simply says to the soldier "Well, well; away!" Antony is just telling the soldier to leave and that he doesn't want to hear the soldier's opinion. The battle then takes place and the audiences finds out that Cleopatra runs away from the battle and Antony follows her. At first the audience does not know if this is because he is scared or that he is chasing Cleopatra to see if she is okay but either way it causes a huge impact on Antony's reputation because if he is scared then it shows the audience that he is not the warrior he has been portrayed as and if he is going after Cleopatra then it shows the audience that he again is not such a great hero as he cares more about Cleopatra than winning the battle and keeping his reputation intact. ...read more.

Here he is daring Caesar to have a fight on land just between them two, sword to sword. Now the audience can slightly see why he is a hero and a brilliant soldier as he has now lost that weak attitude and is becoming strong willed again which shows him as being an admirable man that will stand up for himself and what he believes in. From all this we can see that Antony is very fatally flawed and that he has two main flaws, Cleopatra and his reputation. It is clear that he is very in love with Cleopatra and it even shows that he cares about her more than he does his reputation which makes him the tragic love hero the audience loves. The audience can also see that he is a very admirable man as he is a very strong willed man and is prepared to fight for what he believes in. the audience can also see that he deserves admiration in the way he takes care of Cleopatra and that once again shows just how much he cares for her. He was even backing down and asking Caesar's permission just to be with her and that shows him not only as admirable but also as a tragic hero once more. By Gem Kinsella ...read more.