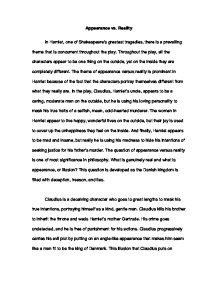 Appearance vs. Reality in Hamlet.

Appearance vs. Reality In Hamlet, one of Shakespeare's greatest tragedies, there is a prevailing theme that is concurrent throughout the play. Throughout the play, all the characters appear to be one thing on the outside, yet on the inside they are completely different. The theme of appearance versus reality is prominent in Hamlet because of the fact that the characters portray themselves different from what they really are. In the play, Claudius, Hamlet's uncle, appears to be a caring, moderate man on the outside, but he is using his loving personality to mask his true traits of a selfish, mean, cold-hearted murderer. The women in Hamlet appear to live happy, wonderful lives on the outside, but their joy is used to cover up the unhappiness they feel on the inside. And finally, Hamlet appears to be mad and insane, but really he is using his madness to hide his intentions of seeking justice for his father's murder. The question of appearance versus reality is one of most significance in philosophy. What is genuinely real and what is appearance, or illusion? This question is developed as the Danish kingdom is filled with deception, treason, and lies. ...read more.

Ophelia and Gertrude display deceptive illusions to hide the corruptions of their lives, appearing to be happy. Shakespeare employs appearance versus reality to hide feelings and emotions of certain characters, such as Ophelia. Ophelia shields her love for Hamlet in the beginning of the play, but eventually is forced to exaggerate her emotions at her father's request. She has to appear affectionate towards Hamlet so that her father can prove to the king that Hamlet's madness is due to his rejected love of Ophelia. Hamlet suspects that Ophelia's love is not genuine, and begins treating her harshly. He displays acts of cruelty towards Ophelia, when he says, "Go thee to a nunnery. Why wouldst thou be a breeder of sinners?" (3, 1, 131-132) At this point he appears to hate Ophelia, which causes Ophelia to have an emotional breakdown. This could've been prevented if Ophelia was able to see that Hamlet's behavior is illusive, and not real. Gertrude also displays deception to hide the corruption in her life. She refuses to accept the truth when Hamlet tells her that Claudius is a murderer. "Here is your husband, like a mildewed ear. Blasting his wholesome brother. ...read more.

Yet, at her funeral, he says, "I loved Ophelia. Forty thousand brothers could not make up my sum" (5.1.280-282) This brings into question the illusion Hamlet created earlier on in the play with his actions towards Ophelia. It further proves that what he appeared to be feeling was not true, and that in reality he really loved Ophelia. Hamlet continually masks his true emotions in the play to an extent where the philosophical question of appearance versus reality comes into mind. Which of his actions are truly real and which are merely an illusion? Hamlet is a play dominated by lies, corruption and deception. As the story progresses, it seems like no one can express what their true motives are, whether they are doing it consciously or unconsciously. Appearance is used often in Hamlet to protect the characters from the truth. All characters appear to feel one way, but in reality, they are thinking the opposite inside. This brings one to the question of appearance versus reality. What is genuinely real and what is merely an illusion, or appearance? Would the characters in the play ever portray their own true thoughts and feelings or always mask it behind deceptive illusions? These questions are of great significance in philosophy and are endless in response. In essence, Shakespeare effectively shows that reality can often be masked by appearance. ...read more.