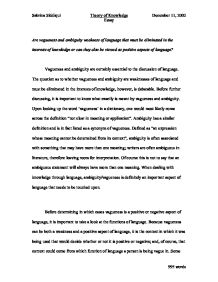 Are vagueness and ambiguity weakness of language that must be eliminated in the interests of knowledge or can they also be viewed as positive aspects of language?

Are vagueness and ambiguity weakness of language that must be eliminated in the interests of knowledge or can they also be viewed as positive aspects of language? Vagueness and ambiguity are certainly essential to the discussion of language. The question as to whether vagueness and ambiguity are weaknesses of language and must be eliminated in the interests of knowledge, however, is debatable. Before further discussing, it is important to know what exactly is meant by vagueness and ambiguity. Upon looking up the word 'vagueness' in a dictionary, one would most likely come across the definition "not clear in meaning or application". Ambiguity has a similar definition and is in fact listed as a synonym of vagueness. Defined as "an expression whose meaning cannot be determined from its context", ambiguity is often associated with something that may have more than one meaning; writers are often ambiguous in literature, therefore leaving room for interpretation. Of course this is not to say that an ambiguous statement will always have more than one meaning. ...read more.

If one was to ask how to get to the Vatican, for example, an answer such as "drive into the city and you should find it" would not be a good answer, as a) the answer is not precise, b) the internal city of Rome is big and complicated enough for the Vatican to be anywhere, and c) because the answer is so vague, the person would most likely end up lost within a matter of minutes. When ordering food in a restaurant, it would be better to be as precise as possible or a person may not end up with exactly what he or she ordered. It is a weakness to be vague in arguing, because if one is not clear as to what his or her point is, then it would be difficult for the person to back up his or her argument. Language is a means of communication, and when dealing with transactional communication (i.e. ...read more.

Another positive aspect of vagueness is to prevent someone from feeling hurt. One may be deliberately vague in answering a question such as "what did you think of my speech?" by answering "the audience seemed to be paying attention..."; the answer does not even specifically address the question asked, as the person does not reveal what he/she thought of the speech. Perhaps the person felt the speech was absolutely preposterous but to not hurt a friend's feelings, he/she stated how it was "interesting according to the audience", not the person him/herself. In conclusion, vagueness and ambiguity can be both a weakness and a positive aspect of language. It depends on the context in which it is used. Seeing as that vagueness does have its positive aspects, there is no reason as to why it should be eliminated in the interests of knowledge. As a matter of fact, a simpler solution would be to be more precise when required rather than eliminating vagueness from the entire face of language. Sabrina Siddiqui Theory of Knowledge December 11, 2002 Essay 995 words ...read more.