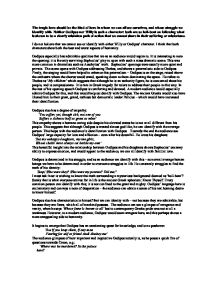 The tragic hero should be the kind of hero in whom we can all see ourselves, and whose struggle we identify with. Neither Oedipus nor w***y is such a character: both are so h**l-bent on following what is shown to be a clearly mistaken path of action that we cannot share in their suffering or misfortune. I do not believe that we cannot see or identify with either w***y or Oedipus' character. I think that both characters show both the best and worst aspects of humanity. Oedipus especially has admirable qualities that we as an audience would aspire to. It is interesting to note the opening: it is the only surviving Sophocles' play to open with such a mass dramatic scene. This was more common in dramatists such as Aeschylus' work. Sophocles' openings were usually more quiet and private. The scene opens with Oedipus addressing Thebes, and shows a paternalistic side to Oedipus. Firstly, the staging would have helped to enhance this paternalism - Oedipus is on the stage, raised above the orchestra where the chorus would stand, speaking down to them dominating the space. He refers to Thebes as 'My children' which suggests that although he is an authority figure, he is concerned about his people, and is compassionate. It is rare in Greek tragedy for rulers to address their people in this way. In the rest of his opening speech Oedipus is comforting and devoted. A modern audience would especially admire Oedipus for this, and this would help us identify with Oedipus. The ancient Greeks would also have likened him to their great, grand, ruthless but democratic leader Pericles - which would have increased their identification. Oedipus also has a degree of empathy: 'You suffer; yet, though sick, not one of you Suffers a sickness half as great as mine' This empathy shows a humane caring side despite his elevated status he is not at all different from his people. ...read more.

and woe for my misery' . In joining the chorus in song meter, he expresses with a new level of emotion and sympathy with humanity. This is in stark contrast to his previous commanding distance and he can now identify and stand beside mere mortal man - which he is himself. I think this is one of the most important parts of the play with regards to Oedipus being presented as a hero. We can identify with him because even if he did pursue a 'h**l-bent' path he made it out alive - and can now empathise with the rest of humanity. A tragic hero must encounter a tragedy - or else they are not heroic, and I definitely can say Oedipus encounters a tragedy. Oedipus does not flinch or hide away from what he has dome - he speaks clearly 'And she that bore me has borne too my children'. This admittance and courage shows the endurance of the human spirit, Oedipus transcends suffering. The audience will feel a degree of optimism for humans - all is not lost in Oedipus Tyrannus. Oedipus, unlike before, now accepts his destiny 'My fate must take the course it will' and accepts it quietly and calmly. The audience do not see the common self-pity of the protagonist in this tragedy unlike others - e.g. Lear in Shakespeare's King Lear. Oedipus remains a tower of strength. Oedipus here highlights the best qualities found in humans. Aristotle stated that it is the quality of the hero's response to the peripeteia and the manner in which he confronts it that determines his essential worth as a tragic hero and gives him ultimate tragic status. Oedipus, in coming through the dark night of the soul, confronts his destiny with courage and bravery. This is echoed in w***y Loman, who never gives up his dream of success for him or his son Biff. ...read more.

We see however, later on in the play, that his attempts to kill himself are not because he is admitting failure, but to gain �20,000 in life insurance in order for Biff to become successful: 'It's twenty thousand dollars on the barrelhead. Guaranteed, gilt-edged, you understand?' he tells Ben in a fictional episode. Ben uses the sinister metaphor: 'The jungle is dark but full of diamonds, w***y' to describe w***y's suicide. This is perhaps a point in the play were I do agree with the expressed view 'h**l-bent' on following a mistaken path. w***y has such determination that he will end his own life to secure some sort of success. I feel that here the audience would find it hard to identify with this - most of us would never go this far, and I think most of us would realise how success is not the most important thing in life. For w***y though, it is what he has based his whole life on, and like Oedipus, he wants to preserve that honour. Miller states that the tragic feeling is evoked in us when we are in the presence of a character who is ready to lay down his life, if need be, to secure one thing - his sense of personal dignity'. This perfectly describes w***y, and so, even if we cannot perhaps identify specifically with his struggle, we are still in the presence of a tragic hero. We could ask however, does w***y need to lay down his life for his personal dignity? It doesn't matter what we think, because for w***y, this is the only way to. I feel that w***y's path is certainly more h**l-bent than Oedipus' in that w***y never gains self-knowledge or approaches an anagnorisis of what he truly is, Biff sadly states in the Requiem 'He never knew who he was'. Whereas w***y dies perhaps in vain, Oedipus survives the dark night of the soul, and accepts his destiny. This could be why audiences more readily see Oedipus as a tragic hero whom we can see the best and worst of ourselves in. ...read more.